Yerasimos Angelis, Managing Director
The time is ripe for a muchneeded transition to clean energy. Conventional energy infrastructures are casting a shadow on the green energy transition. Steam turbines, for instance, are integral to global energy production but, when incorporated within fuel burning thermal power plants, have an enormous carbon footprint impact. They come with higher costs and energy inefficiencies while detrimentally impacting the environment. However, overhauling these legacy systems in favour of efficient and clean energy generation is not an easy feat.

GA R&D, a pioneering energy technology firm, makes the transition to clean energy a hassle-free journey. Tucked in the heart of Aberdeen Harbour, the energy capital of Europe, GA R&D breaks new ground with its proprietary GARD 3C-STEAM Turbines, re-inventing the power generation efficiency and use of steam in current systems.

This has led to the company being profiled in the History of the Parliament Trust 300 years of Leadership and Innovation and in the celebration of Her Majesty Queen Elizabeth II’s Platinum Jubilie as well as presenting 3C-STEAM and chairing a session at the World Geothermal Congress in Iceland.

“We reduce global emissions and promote sustainability in energy operations without having to face the challenges of the clean energy transition,” says Yerasimos Angelis, managing director, GA R&D.

With a wealth of experience in various domains of the larger utility industry, Angelis developed 3C-STEAM Turbines, a novel power generation technology as an economically viable replacement for conventional steam turbines. The modular 3C-STEAM, with 3C standing for compress, cool and condense, is intuitively designed to significantly lower capital and operational costs. 3C-STEAM extends the life of existing power stations by removing expensive, high-maintenance cooling towers. 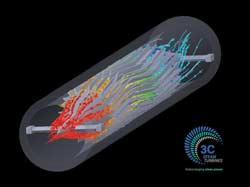 The retrofit steam turbine technology, 3C-STEAM, can be easily integrated with existing power plants to generate clean power from any steam source. It creates renewable steam generation avenues such as heat energy captured from industrial wastes and geothermal sources. The remarkable turbine technology allows companies to maintain the same fuel across various power stations while ensuring the provision of clean energy to meet increasing global demand. Currently, GA R&D is working with global partners to develop the first demo of the 3C-STEAM steam turbine system as it progresses toward scale-up and commercialization.

“We were proud to be representing Scotland and showing off the best of British engineering with what was described as a ‘next-generation energy’ when we were selected to be featured during the Platinum Jubilee celebrations” adds Angelis.

GA R&D has opened up the horizons of energy companies by reducing well intervention costs and increasing productivity and taking on ‘emission impossible’. Conveyance systems are core to all downhole well intervention operations. However, reaching deviated wells with the currently available systems has become complex, expensive, and error-prone.

The GARD U-line roller series is specifically designed to service all types of operations, including slick-line, e-line, and fiber-optic. The system with its modular body and wheels has a slicker, quicker, and superior performing technology design. U-line eliminates the need for screws and fasteners, maximizing its ability to deliver top-notch operational efficiency, safety, and reliability. Above all, the U-line roller system can reach the target depth in wells bringing potential cost savings for companies without using non-eco-friendly, expensive and power-consuming electrical systems like wireline tractors.

Prior to the utilization of GARD U-line, wireline operators were paying up to $100,000 a day to convey a tool string in highly deviated oil and gas wells with the help of electric tractors. Currently, the U-line conveyance system enables operators to pay less than five percent of that cost for the same service, with maximum gain in efficiency. Having demonstrated its capability to bring 95 percent cost savings, GA R&D is also innovating its U-line solution to halve oil and gas production costs.

This once-in-a-generation achievement is commercially available and is witnessing major demand and commercialization. GARD U-line roller system is acclaimed for its record-breaking performance in West Africa, India, Southeast Asia, and the North Sea. The cost-efficient U-line technology is currently lining up for launch in the Middle East, Mexico, the U.S., and Latin America. GA R&D has successfully performed over 400 offshore and onshore well intervention operations without a single failure in three years of operations.

The superior usability and competencies of the GARD U-line roller series can be best explained with a client engagement where GA R&D assisted a vested Malaysian O&G operator, in continuing their oil production operations. Initially, the clients’ wells were shut-in as there was no technology available to reach the target depth cost-effectively and carry out the necessary operations to re-start the wells. GA R&D flipped the script with its U-line roller system, resurrecting production.

“We have reached target depths more economically than anybody has ever managed to do,” states Angelis. “We do not develop our products unless they are indeed the best for the industry “

The huge impact of re-instating production in these wells has been to add significant revenues and energy resources, 1.7 million barrels of oil, to the Operator of the wells.

A Realistic Path to Clean Energy

As a serial innovator in the energy sector for over two decades, Angelis’ never-ending penchant for cutting-edge innovations finds its roots in automotive manufacturing. He helped to design and build the first Scottish hydrogen fuel cell eco-car in 2003. He also redesigned an Indian electric car into an electric-hydrogen hybrid car with an extended mileage range. These underrated findings in the transportation industry hold a special place in Scotland’s and England’s technology museums.
Currently, GA R&D is set to revolutionize the design of nextgen hydrogen-powered combustion engines. Considering the carbon footprint constraints, GA R&D envisions launching a prototype of the eco-friendly electric-hydrogen or gas-electric hybrid car in the coming years after finalizing the ongoing projects.

On the road ahead, GA R&D’s 3C-STEAM turbine is expected to be a game-changer in the energy space as global concerns around greener and cleaner energy take precedence. Concurrently, GA R&D has taken note of the increasing popularity of small modular reactors (SMR) for their potential to become the future of power generation, and envisions developing one for the successful launch of 3C-STEAM turbines. Armed with disruptive green energy solutions, GA R&D moves the needle in sustainable power generation and well interventions. 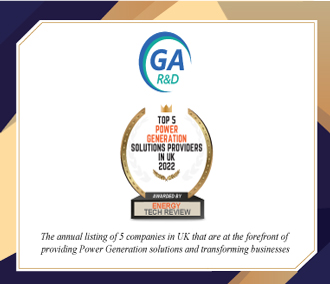