The concern over the usage and subsequent detriments of conventional fuels have reached the tipping point in most countries. Thus, it is not surprising when a sizeable chunk of households and businesses alike turn their attention to installing solar photovoltaic (PV) systems and battery storages to cut down on emissions and energy costs. These distributed energy resources (DERs) represent a fundamental revolution in our energy system. One which heralds the change of electricity which once flowed unidirectionally from large, centralized power plants to consumers, to now also flowing from multiple small-scale energy suppliers who have an increasingly large impact on the electricity grid’s operation. With energy companies—network operators, electricity retailers, and integrated utilities—keen on deploying the relevant technology for progress, they need tools from experts that securely integrate and manage diverse mixes of DERs to optimize system-wide outcomes. SwitchDin catalyses this transformation by working with key players across the sector on cutting-edge projects that include not only utilities, but also equipment manufacturers, solar installers, and energy end-users themselves.

Based in Australia, a country that leads the world with its rate of solar PV penetration, SwitchDin helps create an infrastructure for tomorrow’s electricity ecosystem through smart control of distributed energy resources—solar, batteries, and more, that merges the ‘small’ picture into the ‘big’ picture. To understand what either of these ‘pictures’ implies, one needs to look no further than SwitchDin’s Droplet and Stormcloud technologies. Droplets are generalized DER controllers and communication adapters for homes, businesses, microgrid controllers, and DER system aggregators. “Its versatility in integration allows Droplets to connect directly with the devices they manage across a range of protocols and standards, acting as an intermediary for different brands of solar products and batteries,” says Dr. Andrew Mears, CEO of SwitchDin. Each Droplet-equipped site or device can operate autonomously or in coordination with other Droplets via Stormcloud, the company’s cloud-based management platform.

With each Droplet a gateway into Stormcloud, Energy companies and aggregators can use the platform to tap into and control portfolios of Droplet-equipped sites or individual devices. As a cloud-based distributed computing platform, Stormcloud provides scalable and secure data collection, analytics, and orchestration of rooftop solar, battery storage, and controllable loads with end-user and fleet manager web portals.
As a single, hardware-agnostic platform, it provides seamless fleet-wide operation for demand response management, energy trading, or ancillary services.

Droplets connect directly with the devices they manage across a range of protocols and standards, acting as an intermediary for different brands of solar products and batteries

SwitchDin aims to provide technology that orchestrates a reliable management of DERs to solve complex energy problems. The company’s edge computing technology integrates with most PV inverter & battery storage products, creating a uniform interface for smart control of Virtual Power Plant (VPP) systems. It also enables virtual control of demand response enabled devices (DREDs) such as air conditioners, water heaters, and electric vehicles. VPP-ready sites are equipped with real-time monitoring & control functionality, such that VPP operators can make real-time decisions about when, where, and how to deploy resources in their fleet.

One of SwitchDin’s clients, Horizon Power, was investigating the viability of smart control of DERs in the form of a VPP to reduce infrastructure costs while improving network reliability. In the client’s Smart Sun project, Horizon Power deployed SwitchDin Droplets in participating households to provide usage analytics and device control for each site. The distribution transformer was equipped with a Droplet to monitor voltage levels on the network, and power flows through the transformer itself. In conjunction with data from the households, this allowed the client to establish a closed-loop control of the local network via SwitchDin’s Stormcloud cloud platform.

With the company’s uniform interface with smart algorithms and a single cloud platform to tap into multiple DERs, SwitchDin allows systems operators to achieve performance goals within capacity limitations and other constraints. Simplifying the implementation of site-specific and aggregated services, including energy optimization and energy market interactions, SwithDin lays the groundwork for peer-to-peer energy and virtual power plants.

Description
SwitchDin gives energy companies - network operators, electricity retailers and integrated utilities - the tools they need to securely integrate and manage diverse mixes of small-scale distributed energy resources (DERs) to optimise system-wide outcomes for everyone. They do this by working with players across the energy sector, with clients and partners that include not only utilities, but also equipment manufacturers, solar installers and energy end-users themselves. SwitchDin is on the frontlines of an energy revolution, working with key players across the sector on cutting-edge projects around the country - and an expanding reach around the world 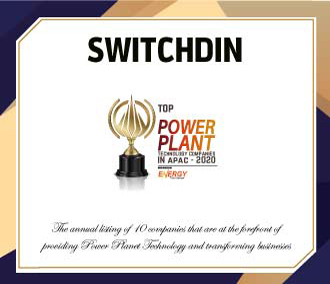