In the year of 1938, an amateur weather-watcher named Guy Stewart Callender published a paper that proposed the direct link of the burning of fossil fuels to the warming of the Earth’s atmosphere. This monumental discovery, known as the Callender Effect, however, met with scepticism and dismissal by many meteorologists. It took several decades more for scientists and policymakers to realise the adverse effects of CO2 emissions from the use of fossil fuels as the energy sources on climate and its dire consequences (which we are experiencing right now). With each year of delay and denial, the impact had continued to mount. Later in 2015, the United Nations Climate Change Conference (COP 21) in Paris led to 195 countries adopting a universal, legally binding global climate deal that aims to keep global warming well below 2°C.

To deliver this ambitious target, the economies are required to decarbonise the existing energy system. Several governments have already embarked on the path of energy transition from a hydrocarbon-based economy to a decarbonised economy by adopting international regulatory frameworks and implementation strategies. Amidst these efforts, hydrogen and fuel cell technologies have shown significant potential to enable the indispensable transition to a clean, low-carbon energy system. To underpin and leverage the enabling role of hydrogen in the decarbonisation agenda, in 2017, the Hydrogen Council, a global initiative of leading energy, transport, and industry leaders, was formed. A supporting member of the Hydrogen Council and the leading provider of alkaline fuel cell solutions, AFC Energy, is at the forefront of hydrogen-based electricity generation technology and in the vanguard of the energy transition for the future.

AFC Energy offers alkaline fuel cell systems for the generation of clean energy, providing the best in class performance and lowest operating cost. Developed in UK research and manufacturing facilities, the company's patented proprietary fuel cell stack design ensures the highest efficiency, robust design, and economical operation while being free of pollutants and greenhouse gasses. AFC Energy is committed to helping customers achieve a net-zero carbon future through continuous development and improvement of its H-Power suite of products, which centre around its core alkaline fuel cell technology. “We enable our customers to drive down emissions while ensuring continuous operation within an acceptable pricerange compared to traditional solutions,” says Adam Bond, CEO of AFC Energy.

One of the first fuel cell technologies developed, alkaline fuel cells ) have been around for a very long time. Its early usage was in the Space Shuttle fleet and the Apollo space program by NASA in 1960 for providing electrical power onboard systems as well as drinking water. Due to its excellent fuel conversion efficiency and reliability, alkaline fuel cells prove to be a key enabler in the mission of zero-carbon emission economy. However, the fuel cell sector and hydrogen economy have been challenged on two key fronts to bring the clean energy vector to market—the grade of hydrogen necessary for effective fuel cell operation is often measured as Ultra-Pure Scientific Grade (99.999% H2) and comes at a significant price, and the loading of precious metals present in the fuel cell electrode has often made for a very expensive catalytic conversion of hydrogen into electrons. These characteristics directly affect the affordability of power produced from hydrogen and impact the vision for the hydrogen economy.

Through its H-Power technology platforms, AFC Energy is addressing both of these challenges and translating it into one of the lowest cost fuel cells in the market today. Backed by the world-class leader in electro-chemistry, Industrie De Nora S.p.A, AFC Energy’s patented alkaline fuel cell affords the flexibility of using low-grade hydrogen streams. The fuel cell can utilise hydrogen generated from cracked ammonia, water electrolysis, vented industrial hydrogen streams, reformed biogas, and industrial gas merchants.

Further, with breakthrough ammonia technology, the company supports on-site hydrogen generation for point-of-use consumption, for instance, cracking of ammonia, enabling fuel cells to be deployed in remote locations previously unable to import and store viable hydrogen fuel sources. The fuel cell technology also provides the opportunity to displace precious metals either entirely or to a greater extent than alternative fuel cells in the market.

AFC Energy’s fuel cell is scalable (from 10KW to multiKW) and more resilient to CO, CO2, and other fuel contaminants. It uses low-cost materials and has very few manufacturing steps while providing a long operational life cycle with better fuel tolerance. The company’s alkaline fuel cell technology is based on the electrochemical combination of hydrogen and oxygen in a non-combustion process. “A fuel cell has two electrodes and a conducting medium—the electrolyte—which can be liquid or solid. Charged particles move from one electrode to another in the medium, and when the electrodes are connected by a circuit, electrons move from one electrode to the other, causing a circuit. In AFC’s alkaline fuel cell, the reaction that causes this process occurs when hydrogen is fed into the fuel cell and reacts with the hydroxide (OH -ve) ions chemical in the electrolyte, releasing energy and electrons while producing water,” explains Bond. Similarly, oxygen (from the air) is fed into the cell which reacts with water to produce electrons and more hydroxide ions for the electrolyte. The electrical generation can be made continuous with a constant supply of hydrogen and oxygen to sustain the fuel cell reaction.

AFC Energy is bringing its proprietary products suite to the market after a decade of extensive research and development by experts and scientists. The products are built around a modular design that can be deployed and scaled easily. This also enables integration with other technologies to help customers harness the strengths of each one, allowing a phased reduction of emissions in the process. Further, in tribute to the Hydroxyl Group that plays a critical role in the functioning of a fuel cell, AFC Energy uses the HydroX-Cell(L) and HydroX-Cell(S) terminology to define its fuel cell products.

HydroX-Cell(L) is the original AFC Energy Alkaline Fuel Cell and delivers zero-emission power. The product is capable of deployment in mid to large scale industrial applications with superior longevity and provides leading fuel cell efficiency higher than 60 per cent. The product delivers bespoke and standardised 10kW modules that are easy to configure and connect for power generation as per needs. When containerised, it simplifies and reduces the cost of installation and transportability. The container is also insulated and fitted with the required environmental controls to allow operation in a wide range of climates. The HydroX-Cell(L) is available in three standard configurations along with bespoke sizing options on request. By deploying with existing and complementary technology for portfolio technology strategy, the HydroX-Cell(L) enables customers to map out a glide path to net-zero carbon emissions while containing the cost of power.

Further, HydroX-Cell(S) is AFC Energy’s latest-generation hydrogen power generation technology. With the company’s industry-leading Anionic Exchange Membrane (AlkaMem), the product offers enhanced power density equal to or higher than alternative high-density cells available today. This power density is achieved without the need for ultra-high purity hydrogen, unlike PEM fuel cell technologies. With superior power density and high alkaline fuel cell efficiency (similar to HydroX-Cell(L)), HydroX-Cell(S) can be used in mobile and stationary applications—in trains, heavy machinery, shipping, and associated military functions. The product is currently undergoing development.
Another from the product portfolio of AFC Energy is AlkaMem Anionic Exchange Membrane (AEM) developed initially for the HydroX-Cell(S) fuel cell system that offers a highly conductive, robust and cost-effective membrane technology for sale or licensing into ancillary market applications. The performance of the AlkaMem has been independently monitored and successfully appraised by industry leaders against key operational metrics.

Both the HydroX-Cell(L) and HydroX-Cell(S) are capable of deployment either as stand-alone units or as part of a wider hydrogen generation/hydrogen conversion unit to support emission-free off-grid power supply. Auxiliary Equipment for hydrogen generation equipment (ammonia crackers, electrolysers powered by renewable energy sources) are also available from third party suppliers through AFC Energy for integration into the final product solution.

Bolstering Phased Emission Reduction Strategy
Following the path of clean energy, the transition is not as smooth as it reads. Replacing the currently used hydrocarbon systems at a pre-defined binary rate is practically not possible. Rather a more planned switchover is required so that a glide path is set. For this, solutions that complement the existing technology helps customers in the transition period and later substitute the system. This is especially relevant for industries using diesel gensets such as mobility, construction, and offgrid service sectors. Incorporating this concept, AFC Energy offers the proprietary zero-emission H-Power fuel cell system designed to provide scalable (20kW to multi-MW), clean, off-grid power solutions for industries where grid capacity is constrained or indeed, where it does not exist at all.

The H-Power system delivers first-in commercialised off-grid hydrogen-fueled Electric Vehicle (EV) recharging for commercial and industrial vehicles. The zero-emission, off-grid rapid EV charger can be safely fuelled using a variety of hydrogen sources while operating at optimum efficiency to enable rapid charging rates when and where it is required. The system contains a combination of HydroX-Cell(L) fuel cell and battery storage or supplementary grid power along with ancillaries to optimise efficiency and provide a high-level EV charging rate “Our system is independent of the grid and delivers EV charging in the most remote off-grid locations or in highly populated urban areas where supply is over-subscribed. With this system, we provide a solution to support the industry’s emerging need for a national network of EV charge-points,” states Bond.

Similarly, the H-Power systems can be utilised in the temporary power and peak shaving markets to reinforce the grid during peaks in demand occur or where off-grid power is required for short durations to meet supply shortfall. The H-Power system, along with traditional temporary power solutions helps to reduce carbon footprint and power cost. Another instance for showcasing the H-Power system’s capability is the construction industry, where the systems can be used for EV vehicles and equipment such as generators, resulting in a progressive reduction of emissions. Further, the system finds applications in mining, biogas, data centre, and electrochemical industries.

A Glide Path to Hydrogen Economy

Bolstering its mission to mitigate the energy challenges and delivering emission-free solutions, AFC Energy fosters global partnerships. Currently, the company is partnering with DeNora, the largest provider of electrodes and coatings for electrochemical processes, for development and mass manufacturing of fuel cell electrodes as well as Advanced Plastics for the mass manufacture of our fuel cell flow plates. Similarly, Roles Services, manufacturer of Europe’s largest range of EV charging solutions, works with AFC Energy to integrate their charge point infrastructure with H-Power EV charge systems.

Moving ahead, for instances where the H-power technology platform could be adopted to replace traditional power drives, AFC Energy looks forward to working with industrial partners to develop new markets, by combining experience and know-how in fuel cells with potential partners' product development, packaging and distribution capability. The company also plans to seek developers of proprietary technologies for on-site hydrogen production, bringing developments into its suite of hydrogen supply options. With its ingenious solutions, AFC Energy is a critical stepping stone towards the journey of realising emissions-free hydrogen-based economy.

Description
AFC Energy is the world’s leading developer of low-cost alkaline fuel cell technology with a mission to provide emission-free solutions to the world’s energy challenges. Developed in UK research and manufacturing facilities, the company’s patented proprietary fuel cell stack design ensures the highest efficiency (more than 60 per cent), robust design, and economic operation while being free of pollutants and greenhouse gases. The fuel cell is scalable (from 10KW to multi-KW) and affords the flexibility of using low-grade hydrogen streams, including cracked ammonia 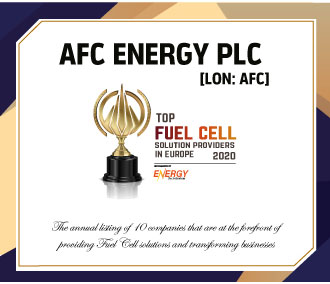