Jesus Gimenez Murcia, General Manager
Since its invention, the internal combustion engine has changed the way people travelled between places by providing horse-power to transportation vehicles. A key aspect of the working of an internal combustion engine involved the ignition of fossil fuel-based fumes in generating the sparks that heat the air around pistons and transform the chemical energy in the fuel into mechanical. Today, mankind has made tremendous strides in the automotive industry with more robust chassis, better fuel efficiency in engines, and longer performance. However, as the adverse effects of the fossil fuel industry are baring its fangs on the world through global warming and climate change, the movement towards alternative power sources that can power automobiles is gaining tremendous traction. And as electrical energy is the best possible replacement for fossil fuels, developing electric vehicles powered by hydrogen fuel cells has become a critical milestone on the roadmap of every leading and emerging automotive company.

While this approach toward shifting from internal combustion engines to fuel cells has only gained significance in the last decade, the forward-thinking leaders at the helm of Spain-based Ajusa foresaw the end of fossil fuel-based power almost two decades ago. As a leader in the production of combustion engines and their components, Ajusa gradually started investing in fuel cell R&D to develop a portfolio that could become their saving grace in a future where internal combustion engines become obsolete. A key facet that perfectly poises the company to manufacture effective and robust fuel cells is its patented sealing technique. This sealing process was originally acquired to seal gaskets, but today has become a critical step in developing hydrogen fuel cells with zero leakage. “We have performed extensive R&D over two decades to develop our portfolio of fuel cells that leverage our patented sealing process and power a wide range of technological applications across multiple sectors,” says Jesus Gimenez Murcia, general manager at Ajusa.

Founded in 1972, Ajusa originally manufactured bolts, seals, feed pipes, and gaskets, among others. Currently, the company is the only family-based, private organisation performing R&D in fuel cell technology. Ajusa’s prime products are still its gasket offerings, but the company now has a portfolio of effective hydrogen-based fuel cells that can produce up to 15 kilowatts of power.

In fact, the company has already powered electrical grids in Spain, where its fuel cells act as backup power generators in case of emergencies. Furthermore, Ajusa’s fuel cells are designed to detect discrepancies on the grid and notify the relevant parties to minimise downtime.

With such unmatched competencies, Ajusa has ignited several success stories since its inception. In one instance, the company helped a commercial vehicle manufacturer power their offering in a greener way. Initially, the client planned to power their vehicle using a typical rechargeable battery. However, due to the high power requirement of their automobile, the final battery displayed rapid discharging of the battery. To mitigate this challenge, Ajusa helped the automobile producer implement their fuel cells, which charge the original battery as and when required, enabling the customer to overcome their power generation problems and go to market.

At the heart of this success is Ajusa’s in-house ability to manufacture fuel cells, eliminating delays and other inefficiencies caused by disparate entities. Out of all the components required to build a fuel cell, the company only procures the membrane and the catalyst from outside suppliers in the U.S., Japan, and South Korea. At the same time, Ajusa’s 40,000 sq. feet manufacturing facility that boasts the latest and greatest robotic automation processes and production lines also helps the company ensure enhanced control over all the added value channels of its fuel cell manufacturing.

Looking ahead, Ajusa predicts a plummet in the prices for hydrogen and aims to capitalise on the imminent opportunity by expanding its suite of fuel cells to incorporate newer applications in additional markets. In pursuit of this, the company is currently testing a fuel cell able to produce 100 kilowatts. To conclude, Jesus gives a glimpse at Ajusa’s roadmap, saying, “Over the years, we have powered everything that can be powered by a fuel cell, and moving forward, our aim is to become the most competitive hydrogen fuel cell providers in the automotive and other industries across the world.”

Description
Designs, develops, and manufacturers hydrogen-based fuel cells for a plethora of applications in the automotive, telecommunications, healthcare, and other arenas 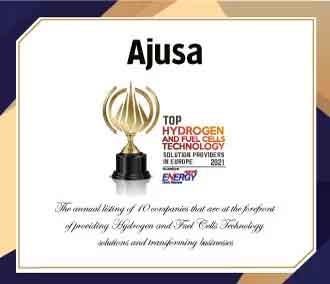