Levent Gun, CEO
Humanity’s future undoubtedly lies in adopting renewable energy resources like solar. Indeed, a recent report forecasts installed photovoltaic (PV) solar capacity globally will grow 20-fold by 2050, when solar will be the leading source of electricity production at 38 percent of all generation. Despite reports of how quickly solar is growing, today it only accounts for about 3.5 percent of the global energy production. Solar energy still has a long way to go before it can become a more viable replacement for fossil fuels.

Lowering the cost and improving the efficiency of the components used in PV systems is paramount to make solar more ubiquitous. In addition, solar is an intermittent resource that only generates energy during day-light hours. For solar to reach its full potential as an alternative to fossil fuels, it is also crucial to improve the economics of energy storage systems that use batteries to store solar energy produced during the day for later use. This is important for residential and commercial systems, as well as utility-scale power plants where demand for “hybrid” PV-plus-storage systems is driving major investment.

Ampt is on a mission to replace fossil fuel with solar by making it more affordable and efficient.

“It’s all about lowering the cost per kilowatt-hour to accelerate the adoption of solar,” says Levent Gun, CEO of Ampt. “Our technology cost-effectively increases energy production from solar power plants.” Ampt’s flagship products—called String Optimizers—are power converters that deploy in large-scale PV power plants and in systems that are co-located with batteries. Ampt has become the industry leader in this market which is one of the fastest growth areas in renewable energy globally.

Energy storage holds the answer to the looming danger of climate change. Organizations and governments must move very quickly to develop and install solutions that store as many gigawatts as possible in combination with renewable sources of energy. Efficient and low-cost energy storage is critical for solar adoption, which Ampt is making possible by helping organizations integrate storage devices seamlessly into their solar plants.

Ampt also provides flexibility on when power plant owners and operators can choose to add storage to their PV systems. Because Ampt’s solution is on the direct current (DC) side of the system—referred to as DC-coupled storage— clients can augment solar power plants with batteries throughout the life of the system using a more cost-effective and efficient approach.

Ampt also enhances energy production by minimizing losses caused by the electrical mismatch that develops in PV systems as they degrade over time. Ampt’s higher performance solution significantly reduces the cost per kWh of energy produced by solar power plants. Ampt products also provide precision data about each series string of PV modules to help plant operators efficiently operate the plant during its lifetime. This lowers the operation and maintenance costs.

A capital cost comparison by an independent engineering firm shows that Ampt could save over $18 million for its customers in a 100 MW solar-plus-storage system. A recent project where Ampt was deployed in a 240 MW system in South America further attests to its capabilities. This record-setting solar-plus-storage power plant—the largest in Latin America—will produce massive amounts of energy, which will be stored in a remote location and then transmitted to coastal cities when the power lines are less congested.

Ampt has created a rich ecosystem of partners, where it works closely with its customers and the industry’s leading solution providers. This includes top manufacturers of inverters, energy storage solutions, trackers, and other equipment to deploy the most advanced and optimized systems.

Ampt is known for its innovation and patented technologies. However, its most distinguishing strength is the creativity of its people and dedication to customers. Their diligence has earned the company significant growth over the last few years, doubling its shipments yearly. By the end of 2022, Ampt will double its production capacity to 4 GW per year and expects to keep increasing it until the dream of clean energy becomes a reality. 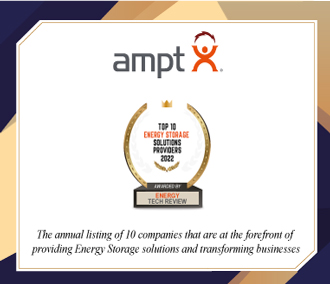