BELECTRIC: Towards a Sustainable Future

The infamous quote, “I’d put my money on the sun and solar energy. What a source of power!” has been attributed to Thomas Edison, the renowned inventor and entrepreneur. Amazingly, Edison (1847-1931) made the prescient, futuristic remark decades before mankind discovered the infinite benefits of solar energy. If Edison were alive today, he’d be thrilled to bits at learning that mankind has not only harnessed solar energy but found ways to design climate-friendly solar power plants that don’t disrupt the natural habitat.

To design climate-friendly energy is obviously a desired outcome for most energy storage solution providers. However, BELECTRIC has a proven track record of integrating ground-based solar power plants into existing habitats. Despite creating a biosphere in the midst of cultivated landscape, BELECTRIC ensures 99 percent of the natural areas exist even after the construction of solar power plants. When selecting areas to deploy new plants, Team BELECTRIC carries out a thorough site analysis to ensure seamless integration of power plants and nature. Since the power plants are lined by dense hedges, they disappear and become nearly unrecognisable to the naked eye. When a BELECTRIC solar power plant is placed on a landscape of intensive agriculture, an assortment of meadow vegetation and natural grasses continue to grow around the plants and under the solar modules.

BELECTRIC’s solar power plant deployment methodology is so eco friendly that it creates an undisturbed biosphere for fauna and vegetation. As a result, rare wild herbs, insects, and birds can happily complete their development cycle while residing alongside BELECTRIC’s gold standard solar photovoltaic (PV) panels. Plants can bloom and seed, animals can breed their young ones.

That’s not all. BELECTRIC’s low raw material consuming-solar power plants produce 100 percent carbon-free power, preserve the native soil, increase agriculture yield, and reduce ecological footprint (if any) nearly completely. This is just another example of BELECTRIC diversifying the process of solar power construction. Uniquely positioned as one of the world’s largest O&M providers, BELECTRIC offers a range of fully-integrated services to support the continuous energy needs for myriad industries. Through its state-of-the-art solar power plant technology and energy storage technology, BELECTRIC supports the grid infrastructure and thereby contributes to significant cost reductions in the energy sector. Courtesy several patents and innovations, BELECTRIC has undeniably proven its technological leadership in the industry.

BELECTRIC’s patents and innovations are represented in the form of a number of cutting edge solutions. The Germany-headquartered company offers solutions and services in three different segments—PV power plants, battery & hybrid, and O&M services. Under PV power plants, BELECTRIC offers utility scale PV systems such as PEG, EPC system integrator, grid connection, grid stabilisation, battery storage upgrades, and natural energy systems. BELECTRIC’s environment-friendly PV power plants are also deployed in the form of roof systems, for both the commercial and residential sectors. In recent years, BELECTRIC’s commercial roof systems have become the company’s biggest calling card and lucrative business model. Whether it’s for a Fortune 500 company in North America or a Government-based project for a country in Asia, BELECTRIC has proven its competence in constructing PV systems on rooftops across the world.

With a combined capacity of 26 Megawatt peak (MWp), the two solar plants were constructed within six months while maintaining the highest Health, Safety & Environment (HSE) standards. On behalf of one of its clients, Cleantech Solar, BELECTRIC took charge of the complete construction and commissioning of the two projects. “We are particularly proud to have completed these large-scale projects not only on time and quality but also in accordance with our high European health and safety standards. This underpins our strong position in the Indian EPC market, which is not only one of the largest and fastest growing solar markets but also one of the most challenging,” said Ingo Alphéus, CEO of BELECTRIC.

Cleantech Solar—one of the leading providers of solar energy in South-East Asia—was understandably thrilled to partner with BELECTRIC, a world leader in the development and construction of utility scale solar power plants and energy storage systems. “We are delighted that these industry leaders have once again chosen Cleantech Solar as their trusted long-term partner. We are pleased to collaborate with BELECTRIC, which has a proven track record in rooftop solar deployment and shares our values of delivering high performing systems with high HSE & Quality standards. We look forward to working with BELECTRIC again for future projects,” said Raju Shukla, chairman and founder of Cleantech Solar.

As for battery and hybrid systems, BELECTRIC offers battery storage systems that can be customised accordingly for a wide variety of applications and business models. BELECTRIC’s hybrid energy solutions include the 3.0 MegaWattBlock hybrid system—an innovative battery system that adjusts load variations and enables ancillary grid services. BELECTRIC’s patented hybrid power technology makes it possible to combine the benefits of fuel-based energy sources with climate-friendly solar power. Using just one AC power block that combines photovoltaics, energy storage, and fuel-based power generation, the 3.0 MegaWattBlock hybrid system guarantees enterprises 24/7 energy production with maximised use of fuel-less solar power. The hybrid technology is suitable for integration in both on- and off-grid environments.

Under the hybrid systems category, BELECTRIC also excels in providing hybrid energy solutions for power grids. The most noteworthy adopters of the solutions are conventional power stations. This complete solution is brought to life courtesy the new BELECTRIC Hybrid Technology; the reliability of fuel-based power plants is combined with the cost-cutting potential of BELECTRIC’s solar power plants. By availing BELECTRIC’s hybrid energy solutions for power grids, clients become less dependent on continuously increasing fuel costs and maximise the benefits of climate-friendly power generation.

One such example of a client leveraging BELECTRIC’s customised hybrid system involves an electric fuel station based in Duisburg, Germany. The client was unable to meet increasing demands, especially since the local grid capacity was insufficient to support large-scale expansion of fast-charging stations. Also, the charging station was unable to service hoards of city dwellers who don’t own a parking space (EV charging) of their own. BELECTRIC stepped in and changed life for the electric fuel station. By combining fast-charging stations and a solar roof with a battery component, BELECTRIC inaugurated the first such fast-charging facility in the North Rhine-Westphalia area. While the integrated battery storage with 210 kWh of capacity minimises pressure on the grid, it also buffers peak load periods when several vehicles are simultaneously fast-charging on full power. BELECTRIC’s battery storage also maximises the full capacity of local solar power. The results? The electric fuel station is often able to completely off-grid and can cater to the EV charging needs of hundreds of vehicles.

A Company Full of Energy

The above example sheds more light into BELECTRIC’s commitment to laying the foundation for environment-friendly energy supply of the future. Just like with any industry innovator, BELECTRIC’s success in this endeavour can be attributed to its greatest strength—its competent workforce. Founded in 2001, BELECTRIC has constructed over 300 solar PV power plants across the globe by banking on its team of 714 employees. From product development and construction, to operation and maintenance services for solar power plants, Team BELECTRIC has proven their worth. Its team of engineers and project developers are constantly exploring and researching new areas of solar PV technology and battery storage systems, to develop new technologies.

Driving ahead, BELECTRIC will continue to deliver extensive, eco-friendly energy solutions such as photovoltaic power plants, energy storage solutions for grid application, hybrid PV solutions for use of existing conventional energy resources, and customised off-grid systems. In the realm of battery storage solutions, BELECTRIC is particularly excited about its recent partnership with Audi. As part of the project, BELECTRIC has built a battery storage facility for the German automobile manufacturer at the EUREF Campus, a green innovation cluster in Berlin. According to reports, BELECTRIC was contracted to build the storage system for Audi, with its 20 batteries sourced from test vehicles belonging to the car manufacturer. The battery storage system will enable Audi to provide a crucial link between volatile generation from renewable energy sources, various consumers, and state-of-the-art power grids.

This is yet another project that demonstrates BELECTRIC’s unmatched expertise in integrating a huge variety of battery systems. As the rest of the world prepares to embrace solar power plants and photovoltaic roof systems for its energy needs, BELECTRIC is in prime position to reach newer markets. “We are on a growth course. The market is growing, and we want to be there,” Alphéus said recently after BELECTRIC showcased its range of PV power plants and battery storage systems at the Intersolar Europe trade show.

Description
BELECTRIC is one of the most successful enterprises in the realization of utility-scale solar power plants and energy storage systems. BELECTRIC was founded in 2001 and has been expanded by six shareholders to an international group since then. The company has constructed over 285 solar PV power plants with over 1.6GWp PV capacity so far. The reconciliation of economic efficiency and ecology forms the basis for the company’s sustainable success. From product development and construction up to operation and maintenance services for solar power plants, 500 employees are working for the company 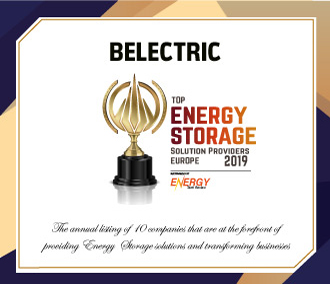