Sebastien Lacaze, Co-Founder and CEO
For years, seismic data have been used as a first pass to identify promising subsurface with hydrocarbon potential. The process involves an exploration team interpreting the seismic data on a traditional petro technical platform to create a high quality subsurface model that helps in tracking a seismic horizons section and correlating it with the geological history of a basin.

While this system is not flawed, constantly falling oil prices and shrinking margins on returns are making it difficult for many oil and gas companies to explore and develop reserves cost-effectively. A leading subsurface geoscience solution provider, Eliis, is rising to the challenge by reinventing the wheel of seismic interpretation. The company has developed cutting-edge seismic interpretation software, PaleoScanTM, that combines human and artificial intelligence for better and faster interpretation of seismic images, to aid in a superior understanding of the subsurface.

“PaleoScanTM is developed by a team of geologists, geophysicists, and computer engineers to drastically shrink the seismic data interpretation cycles and augment the characterization of geological reservoirs,” says Sébastien Lacaze, co-founder and CEO of Eliis.

From basin-scale evaluation to prospect maturation, PaleoScanTM streamlines the entire exploration and production (E&P) workflow. Its automated seismic interpretation approach is based on the generation of a chronostratigraphic framework – so called Model-Grid – unique to PaleoScanTM and the associated supervised Relative Geological Time (RGT) model.

Powerful editing and visualization modules help geoscientists to perform real-time previews of the iterative RGT model-creation process. This comprehensive method uses a three-step computer-aided workflow to avoid false internal scans. The auto-tracking method utilizes a powerful algorithm to convert all seismic reflections into horizons and organize them stratigraphic ally. In the next stage, flexibility and ownership are given to the interpreter, who can edit the auto-tracked horizons and update the Model-Grid for better quality control and iterations. This is how Eliis combines the power of its integrated platform with the geoscientist’s (interpreter’s) expertise. In a nutshell, it dramatically increases the screening capacity, enables better predictions, and triggers early-stage sweet spotting, even if the drilling targets are hidden at great depths.

What makes the platform even more integrated is its API that enables clients to linkup PaleoScan’s functionalities with any other subsurface interpretation platform. The API lets the clients write and execute part of the code directly inside their existing applications, with no need for external compilation. This year, Eliis is also planning to expand PaleoScan’s flexibility by making it compatible with Open Subsurface Data Universe (OSDU)—a leading standards-based application interoperability platform. That way, the platform users can also leverage the cloud of OSDU with their custom workflows.

Validating Eliis’ value proposition in the E&P industry today can be explained through success stories, including a company that was using conventional software to analyses E&P data for unconventional reservoirs across different basins. By incorporating Eliis’ PaleoScanTMsoftware, the client saw consistent and speedy results. To use PaleoScanTM to its utmost potential, Eliis also shared a complete tutorial that helped the company secure larger projects and significantly grow its market.

Today, Eliis’ PaleoScanTM software is also a sought-after solution in the applied geophysics space, on the carbon sequestration side. The company is currently growing its competencies in deep faults exploration for low-carbon, new energy such as hydrogen and helium by entering into a strategic partnership with 45-8 Energy a European startup specializing in helium and natural hydrogen exploration and production. Through this alliance, the two companies aim to accelerate the helium and natural hydrogen exploration projects and supply local and sustainable helium and hydrogen to the European market. The success of these projects will further pivot Eliis in its long-term vision of making energy exploration and production, along with its utilization, more sustainable and cost-effective. 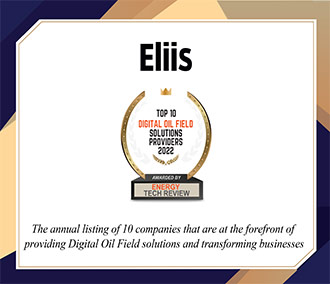