In the early 2000s, a surge in government subsidies, tax rebates, and schemes spurred forward a movement for the adoption of green energy across several European countries. As a result, Italy’s solar power sector flourished and became Europe’s second-largest market in terms of new installations by 2009. Also, with the rising popularity and adoption of technology that harnesses wind energy, Italy is one of only two EU Member States that can meet their targets for renewable energy production by the end of 2020. Yet, with multinational companies installing large-vane wind farms and creating a highly competitive market, business owners are on the lookout for small to medium-sized wind turbines that can generate equally efficient power. As a veteran producer of clean energy, ESPE observed this need in the market and devised specialised solutions to help business owners carve their own niche in the industry.

“We pack the technology of large-scale wind turbines into much smaller form factors,” says Matteo Vecchiato, Export Sales Director at ESPE. Through skill and passion, ESPE has engineered the FX Range of wind turbine generators (WTG) that are as powerful, reliable, and safe as a large WTG but have the size and cost of a small turbine. These turbines can stay active even under extreme wind conditions before stalling into their safety mode and simultaneously maintain a constant output power. A combination of large rotors and direct drive enables ESPE’s wind turbines to work with higher efficiency, reliability, and durability than other small and medium wind energy producers. Active Stall technology, advanced blade profiles, and passive brakes help lower maintenance costs and redundancies and guarantee safety during operation. Finally, advanced SCADA systems allow operators to automate the management and monitoring of these turbines completely.

While the company is on a mission to revamp the global WTG industry with its small-sized turbines, it does not limit its solutions at that frontier. As specialists in generating renewable energy for almost 50 years, ESPE produces WTGs, cogenerators, hydro-electric turbine solutions, photovoltaic (PV) products, and other highly energy-efficient systems.
The company also researches, designs, and builds green turnkey solutions for residential, commercial, industrial, and public administration needs. Although the renewable energy market is rife with opportunities to earn quick profits, ESPE aims to help create a sustainable and cost-efficient distributed power generation network. “Deploying products that harness both wind and solar energy at the same time provides a levelized cost of energy and a greater ROI for the customer,” says Vecchiato.

ESPE follows a principle of moulding its projects based on the clients’ needs and available resources, instead of a ‘one size fits all’ approach.” One of the notable client interactions where this ideology of ESPE shone through was when the company designed wind turbines customised for the Japanese market. Even though these turbines were not a part of ESPE’s product portfolio, the company met the consumers’ demands with a new, specialised range of turbines. ESPE manufactured robust, typhoon-proof 20 kW turbines that could withstand wind speeds of up to 70m/s. The innovative technology used in creating these turbines has made them one of the most efficient and cost-effective in their power range. Although the WTGs are built to have a lifespan of over 20 years, ESPE does not leave the client’s side after the project’s completion. All turbines are equipped with SCADA systems that enable remote monitoring and troubleshooting from ESPE’s headquarters in Italy.

With a long-standing distinction in the energy field, every product that ESPE manufactures is subject to intense quality control and testing before reaching the customers. Its efficient solutions for small wind turbines have found a strong foothold in Asian markets and are also making considerable waves in the American renewable energy sector. Having installed over 900 renewable energy systems worldwide and delivered more than 180 wind turbines, ESPE offers high added value solutions—a result of intensive R & D— to ensure a consistently significant ROI for clients.

Description
ESPE designs and installs reliable green energy systems: wind turbine generators, cogenerators, and hydroelectric turbines and power plants, photovoltaic solutions, highly energy-efficient solutions that integrate the production of clean electricity with the heating and air conditioning systems of the building.Founded forty six years ago, ESPE started its history in the field of large electrical installations and embarked on a path of continuous growth in the field of renewable energy, technology systems, and automation. The company researches, designs, and builds green solutions in residential, commercial, industrial, and public administration contexts 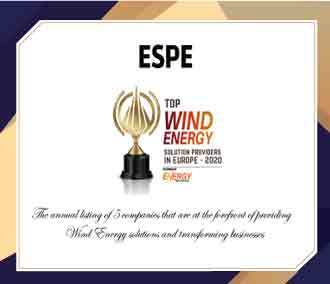