EST-Floattech: The Energizer for a Greener World

The world is at the cusp of irreversible environmental change. As the need to preserve the environment becomes a global societal concern, companies in the maritime industry are innovating efficient energy storage systems to provide cleaner, more affordable, and accessible energy. With this central vision of a cleaner world in mind, EST-Floattech, provider of intelligent energy storage systems for the maritime and industrial equipment industry, advocates the economic feasibility of batteries. The company’s brand offering, the Green Orca 1050, is a compact, high-energy storage system specifically designed for maritime purposes. “One of the major drivers behind EST’s Green Orca battery technology was to make it safe and reliable,” says Paul van Wijk, sales director of EST-Floattech.

In the beginning, when EST was developing generation one of its product, the company had the foresight to look at the requirements that might be present as of today. In the process, EST ensured that the modular design of the solution enabled it to operate 24/7 and was built to premium standards for maritime applications. “Our powerful energy systems based on lithium polymer batteries can be deployed in fully electric vessels or even robust hybrid combinations,” says van Wijk. They significantly reduce nitrogen oxide and carbon dioxide emissions, as well as offensive odors and noise pollution, resulting in a positive impact on the environment.

In the prestigious development project of Elektra, the first hydrogen-fueled tug in the world, EST’s high-density storage solutions made magic happen. Because of the very specific properties of hydrogen existing in the gaseous phase at standard pressure and temperature conditions, there had always been concerns in the marine sector about its feasibility as an energy store.
As the new hydrogen vessel cannot be refilled quickly and easily at a bunker station, the conservation of energy was the most important element. EST’s established marine battery technology allowed energy density to be enhanced in zero-emission marine operations while improving vessel durability as well.

With the team’s background in system integration combined with deep electrical engineering knowledge, EST-Floattech expertly integrates components and stand-alone systems in energy storage. The company developed a system interface that takes care of all the issues concerning safety and battery connections. It is a complete package, made as simple as possible for the customer or the system integrator to get the battery system integrated into the application.

With sights set on the future, EST is diversifying its focus by trying to enter the mobile industrial equipment sector. “However,” Diederick Stam, Managing Operations, of EST-Floattech interjects, “in the energy storage market, it is not at all viable to use the same technology for all kinds of applications.” To make a successful foray into the new industry, the company is researching what battery system would be suitable for the heavy equipment market while being on the lookout for technology that would improve the C-rate of batteries. The company is now developing a portable battery container that can charge mobile equipment in instances where a great connection is difficult to come by.

At the swift rate that ESTFloattech is growing, the company is ensuring that it is doing so steadily. For now, the focus lies mainly on the European market as Stam aptly puts it into words, “The best thing to do is take a big chunk from a smaller market than a small chunk from a very big market.” 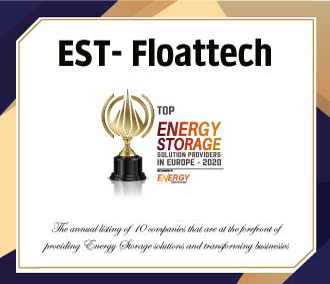