Brian Kay, Chief Technology Officer
Since the middle of the 20th century, the oil and gas (O&G) sector has been leveraging once-through steam generators (OTSG) to pump steam into oil deposits and enhance oil recoveries. However, the working model of OTSG involves venting exhaust gases into the atmosphere, a growing problem in the current business landscape, where organizations are striving to minimize their carbon emissions and achieve greener operations.

Alberta-headquartered General Energy Recovery Inc. (GERI) answers this question with its revolutionary direct contact steam generator (DCSG). GERI’s DSCG has the proven ability to combust air and fuel in direct contact with water, resulting in a single product stream of steam mixed with exhaust gases, which is then injected into an oil well without releasing GHGs into the atmosphere.

“Our DSCG is a powerful, cost-effective, easy-to-use and portable alternative to conventional OTSGs, built to make it easier for O&G firms to minimize their carbon emissions,” says Brian Kay, Chief Technology Officer of GERI.

According to the Canadian Environmental Sustainability Indicators published in 2022, emissions from in-situ oil sand operations accounted for over six percent of Canada’s total GHG emissions. GERI’s DSCG addresses this growing problem with its portable design that can fit within any standard well lease without extensive regulatory processes.

Other advantages of GERI’s DCSG include a 67 percent reduction in GHG emissions with a 50 percent decrease in air contaminants like NOX, SOX, PM2.5, VOC, and CO. From a water utilization standpoint, the company’s equipment uses less than half the freshwater than conventional OTSG primarily due to improved steam/oil ratios using the DCSG.

At the same time, GERI addresses growing supply chain disruptions and their impact on maintenance and technical support through its ability to build and maintain DCSG components in-house. At the heart of this capability is its highly competent team of welders and assembly fabricators that continually tweak or augment the DCSG based on client-specific requirements. Through its end-to-end client engagement approach, GERI acts as a full steam-service provider. It handles tasks across a heavy oil operation, from tying the DCSG to an oil well and equipping it for steam injection to educating on-site personnel on how to safely operate the equipment and downstream maintenance needs.

GERI has been aiming to enhance awareness of DCSG in the O&G sector since its inception in 2014. After years of trying to engage with well operators that were not convinced that direct contact steam could be generated reliably and economically for injection into oil reservoirs, GERI ran pilot projects on their wells in the Lloydminster and Saskatchewan regions. Through these projects, the company showcased DCSG’s ability to inject 80 percent steam quality with combustion flue gases at pressures up to 7 MPa, with rates between 5.5 to 11 GJ/hr (5 to 10 MMBTU/hr). During this phase, the company acquired third-party auditing services from the Saskatchewan Research Council, which visited the well sites to assess the safety, efficacy, longevity, and power generation capabilities of the DCSG. Once the Canadian O&G market evaluated the audit results, GERI witnessed a marked increase in potential clients, from leading O&G players working with heavier oil to emerging businesses looking to establish greener operations cost-effectively.

Today, the company has clientele across North America, with more O&G businesses looking to collaborate with GERI as a surefire way to meet their carbon emissions goals. Moving forward, as the global business landscape continues to emphasize minimizing its carbon footprint, GERI plans to leverage the transformative capabilities of its DCSG and enable O&G businesses to transition into greener operations in a secure and timely manner. 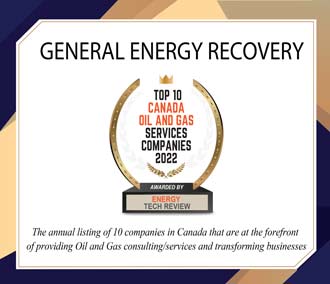