Bartek Kras, CEO
The world, with its sights set on carbon neutrality, is gradually moving away from internal combustion engines toward electric-powered vehicles. This trend is propagated by governments, especially in Europe, where The European Council has set an interim target to cut emissions from new vehicles by 55 percent within 2030. The shift to battery-powered engines is considered a success with regard to passenger vehicles, but its adoption in heavy duty automobiles faces several roadblocks such as high costs, inefficient infrastructure, and the inability to deliver the enormous power required to facilitate long travels and perform rugged operations. With technology enabling batteries to sustain long distances, IMPACT CLEAN POWER TECHNOLOGY S.A. manufactures dedicated battery pack systems for heavy-duty vehicles such as public transportation vehicles, trucks, buses, tramways, and trains.

Engineered at their in-house laboratory, IMPACT CLEAN POWER TECHNOLOGY S.A. battery packs are designed to uphold the intricate functionalities of heavy-duty vehicles, which are required to cope with long lifetimes. “We consistently adhere to the varying specifications of cell chemistries, battery pack designs, and software modifications, focusing on longevity and rugged applications,” says Bartek Kras, CEO of the firm. IMPACT CLEAN POWER TECHNOLOGY S.A. lithium titanate battery systems are developed in order to be used for over eight years, making them ideal for buses in the European region.

In addition to their long lifetimes, the lithium titanate batteries can be charged within 15 minutes, accommodating the recharge of buses at their designated stops; it also facilitates overnight charging. The batteries can be recharged 15 times a day with an ultra-fast charger for up to 600 kilowatts.
To bolster their performance, the firm leverages NMC and LFP technologies which aid in the manufacturing of ultra-light batteries with high energy densities. The prototypes developed using these technologies have recorded power distribution exceeding 300 watts per kilogram, which is two times higher than the current market standard in this segment. If delivered, the prototypes will enable vehicles to run for more than 300 kilometers on a single full charge, making them suitable for delivery and transport trucks that operate in much harsher conditions than the buses.

The firm is taking advantage of The European Union programs that accelerate the shift toward emission-free vehicles by directly financing or co-financing the purchase of large fleets of batterypowered vehicles, especially buses, for the cities. These incentives, coupled with cheaper Total Cost of Ownership (TCO) associated with electric vehicles, due to the minimal costs associated with recharging, have been a massive incentive for the firm to produce batteries in large numbers. As manufacturers are looking to do away with heavy duty fleets powered by diesel engines, the firm sees a unique opportunity to capitalize on this trend. “We will need 1000s of battery packs and systems a year to keep up with the large volumes. To facilitate the large orders, Impact will open its own Gigafactory for the heavy-duty battery pack production,“ says Kras.

In essence, IMPACT CLEAN POWER TECHNOLOGY S.A. enables clients to quickly adapt to cutting-edge innovations that open up new avenues in the world of electric vehicles. IMPACT CLEAN POWER TECHNOLOGY S.A. is launching its own line of heavy-duty fuel cell systems for buses and trucks, recognizing hydrogen-based fuel cell technology as the potential new energy carrier to power vehicles. This move would not only strengthen the firm but also create new opportunities for the future.

Description
IMPACT CLEAN POWER TECHNOLOGY S.A. manufactures dedicated battery pack systems for heavy-duty vehicles such as public transportation vehicles, trucks, buses, tramways, and trains. Emphasizing ecology and the trend toward the green economy, the firm replaces the batteries of the diesel vehicles with their own batteries. Engineered in their in-house laboratory, IMPACT CLEAN POWER TECHNOLOGY S.A. battery packs adapt to the designs and functionalities to cope with the long lifetimes of heavy-duty vehicles 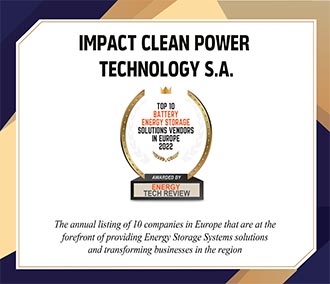