Instant On: Pioneering a Change in Grid Resiliency

AJ Perkins, President
On October 10, 2019, tens of thousands of Californians endured a massive power outage when Pacific Gas and Electric Company (PG&E) scheduled a mass blackout as a part of its “Public Safety Power Shutoff” program. Previously, in 2017 and 2018, PG&E’s power lines, surrounded by untrimmed trees, caused the deadly Camp Fire that led to the death of more than 80 people and the destruction of thousands of homes. To prevent the recurrence of any such incident, PG&E and other utilities in the state began shutting down the power grid during periods of high winds and extreme weather conditions. However, on the flipside, these power outages led to a lot of havoc and created numerous challenges for businesses and residents in running their day-to-day operations.

As a preemptive measure to handle the power cuts, the California Public Utilities Commission encouraged citizens to install solar panels in their homes and workplaces. But solar panel’s high installation costs, lengthy installation time (30- 90 days), and inconsistency resulted in additional problems. Many of the solar-plus-battery systems proved to be inadequate, as battery companies did not prioritize installing intelligent load management systems that prevent shortcircuiting during shut down. Besides, the lack of islandable microgrids (systems that help solar panels maintain some level of service during an outage) in the PV (photovoltaic) systems only lead to further instability and inefficiency.

Against this challenging backdrop, there is one company that foresaw the lack of reliable power and strong grid resiliency and came up with timely solutions to address the resiliency issues of the new decade: Instant ON (IO). Leveraging disruptive technologies, the firm has developed a new, portable 5kWh battery—IO-5M—that can power a wide range of applications, including household appliances such as air conditioners and refrigerators, as well as medical devices like oxygen concentrator and CPAP machines during power outages. With this solution, IO is expanding the horizon of standby on-demand power. In contrast to the traditionally used batteries in PV systems, the IO-5M is designed specifically for targeted resiliency needs. The duration of energy supply during an outage varies on what is plugged into it: For example, an average refrigerator draws around 1.5kWh per day. If one refrigerator were prioritized, the IO-5M would suffice for more than three days without power. AJ Perkins, president of Instant ON, says, “With our solution, customers, as well as businesses, can protect their homes and workspace respectively with energy resiliency and mitigate the risk of grid failures by producing and storing energy in their own power microgrid.” By taking complete control of a building’s energy automation, the IO-5M allows one to remotely control the appliances and improve disaster readiness.

Those impacted by outages often have to wait for months to install a typical plugand- play microgrid for rooftop solar. There is an approval process that one has to go through before installing the solar panel and the system. But now, IO is changing this with its mobile, ready-to-install, plug-in energy storage system IO-5M that can be integrated into a home or an office building without requiring any permit. Unlike traditional low voltage residential installations, which need to be permanently fixed at a location and are not designed with power outages in mind, the company’s IO-5M battery can be moved around a building and deployed to serve specific essential equipment.

Moreover, the IO-5M is built with an MPPT solar charge controller, which makes the device ideal for small, low voltage, off-grid PV attachments.
Rooftop solar can thus indirectly charge the battery in normal operating circumstances. In fact, the firm is working on a pilot in Hawaii, where they are integrating the IO-5M with their IO Hub—Intelligent meter and microgrid control equipment—to replace the conventional smart meter and electrical panel. “This will allow users to control the power at home or workplace, create a digital essential loads panel, and be able to utilize the battery as a way to protect the essential loads without any additional equipment,” informs Perkins.

IO was established to facilitate the integration and distribution of connected, smart, efficient, and flexible microgrid and nanogrid technology to address the electric industry’s salient needs

IO was established to facilitate the integration and distribution of connected, smart, efficient, and flexible microgrid and nanogrid technology to address the electric industry’s salient needs. “As the grid continued to evolve, one of the biggest issues we saw was the increasing need for distributed energy resources across the country. And this led to multifaceted challenges: interoperability, energy optimization, and ease of deployment,” mentions Perkins. Besides, the inability of the different solutions available in the market to operate together was creating energy silos.

To tackle these problems head-on, IO decided to be a one-stop-shop for solar contractors and consumers and help them find the right solution for their needs. IO uses solar energy as a commodity; the firm has aggregated products that can support solar installation and help solar contractors by acting as the perfect complement to their existing installations. One of IO’s solutions is an automated solar panel cleaning system—IOCleantect— that increases solar energy production instantly by minimizing dirt. It bolts onto asolar power system and frequently cleans the solar panels to ensure that it has the most optimized performance. IO-Cleantect distributes purified water through an automated system to clean the panels, reducing labor safety hazards and damage to rooftops. In contrast to traditional panel cleaning methods that use untreated water and allow cleaning only a few times per year, the IO-Cleantect system rinses solar panels every week, thus increasing the energy production by 30 percent.

The IO-5M, on the other hand, comes in both standard high voltage and low voltage battery forms. The high voltage batteries are for commercial use and the low voltage ones for residential installations. These solutions have all been integrated with IO’s inverter technology, more specifically, the IO hub—allowing the different power storage devices to be able to communicate with one other as well as with the home or office to ensure efficient use of power. “The IO Hub is an intelligent replacement for the smart meter, and it allows the utilities to be able to control all of the different buildings to create a connected community,” affirms Perkins.

Besides, IO also provides residential fuel cells. In the face of fires, hurricanes, and other natural disasters, the traditionally used backup generators do not provide the required safe resiliency for businesses and homes. Even the solar-powered batteries are inadequate, do not guarantee protection, and can lead to short-circuiting. This is where IO’s fuel cells, which provide a consistent and reliable flow of energy to buildings, while emitting substantially fewer pollutants, emerge as an alternative. IO is currently conducting a pilot program with a utility to test out this fuel cell in conjunction with the solar microgrid.

“The current electric power paradigm is broken, utilities are going bankrupt, public safety power shut-off is becoming a common scenario, and the duck curve is worsening, prompting solar curtailment,” articulates Perkins. To that end, IO has taken it upon itself to ensure that consumers are not at the receiving end. IO provides the framework for islandable distributed energy resources for affordable, resilient, and equitable microgrid and nanogrid projects. In fact, one of the taglines of the company is: “When power is a priority, insist on Instant ON.” To ensure continuous power for consumers, IO partners with cities, municipalities, existing and new housing developments, commercial buildings, industrial buildings, solar PV installers, and energy service companies. “So, it is not just us but also our partners and collaborators combining engineering expertise and experience to find ways to make things more efficient and optimized,” remarks Perkins.

IO commits to decisive collaboration because resiliency is the need of the hour. Today’s requirements go beyond old sustainability paradigms, and IO is here to help. IO’s mission is to only integrate technology that is optimized, scalable, and deployable.

While a number of factors such as being technology-agnostic and customer-focused play a critical role in IO’s growing success, what truly sets the company apart in the marketplace is their approach toward solving consumer and business needs. “We don’t look at the competition, we rather look for ‘co-opertition,’ which is cooperation and competition as a unit because we want people to push us to become better,” exclaims Perkins. “When we do it together, it allows both parties to create a better solution and better opportunities for themselves and their customers.” It is this attitude of abundance and ‘co-opertition’—where the teams involved constantly work hand-in-hand to push the bar and create advanced solutions—that drive IO to be at the forefront of innovation.

For the road ahead, IO has several plans. The firm is currently actively engaged in commercial energy efficiency pilot projects with utilities to test new technologies and models that relate to the recent energy demand response and renewable energy policies. IO is also collaborating with several companies—domestic and international—to integrate the latest technologies into some of IO’s pilot projects. In light of this, one of the big pilot projects IO is presently working on is a commercial energy efficiency program for a connected community in Perris, CA. IO will be integrating solar, 40kWh battery and its IO Hub control system in each of the homes as well as a megawatt energy storage system in the community center combined with either a fuel cell or a combined heat and power (CHP) system to help create a safe and sustainable environment. “Several companies are approaching us to see if they can incorporate their product as a pilot to demonstrate the viability and the ability to enhance the results for homes and businesses. And that helps us stay at the cutting-edge of what the market is looking for,” concludes Perkins.

The entire energy landscape has, in the last decade, changed beyond all recognition. The use of renewable energy sources is growing. With companies like Instant ON, which leverage renewable sources, the way energy is being generated, stored, and consumed is bound to change for the better.

Description
Leveraging disruptive technologies, Instant ON has developed a new, portable 5kWh battery—IO-5M—that can power a wide range of applications, including household appliances such as air conditioners and refrigerators, as well as medical devices like oxygen concentrator and CPAP machines during power outages. With this new portable, ready-to-install and plug-in energy storage system, IO is expanding the horizon of standby on-demand power. In contrast to the traditionally used batteries in PV systems, the IO-5M is designed specifically for targeted resiliency needs. IO commits to decisive collaboration because resiliency is the need of the hour. IO’s mission is to only integrate technology that is optimized, scalable, and deployable 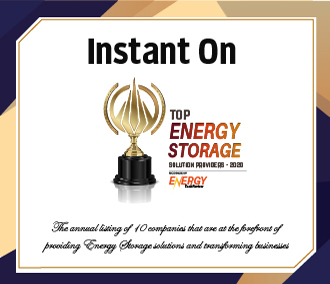