JERA: Ushering in a New Era of Energy

Dr. Sami Ben Jamaa, Managing Executive Officer & Global CIDO
Japan witnessed a dreadful undersea earthquake and a subsequent tsunami that devastated the country and severely crippled its infrastructure. One of the worst hit by the disaster was the Fukushima Daiichi nuclear power plant run by Tokyo Electric Power Company (TEPCO) that had radiation leaks along with permanent damage to several reactors.

After this disaster, Japan shut down its nuclear power plants, and the power producers had to shift their focus to other resources for energy production. Soon Japan’s electricity production was replaced with expensive fossil fuels leading to higher electricity prices. These consequences drove momentum to deregulate markets and introduce efficiencies via new technologies and business models by allowing new entrants and supporting market trading of power. This has enabled many companies in Japan to take the exquisite benefits of the deregulated energy sector and introduce a variety of options, including renewable energy resources. Meanwhile, TEPCO leveraged this opportunity to revive its business by entering into a strategic alliance with Chubu Electric for thermal power generation to provide electricity at lower costs. The two electrical companies joined forces to launch JERA to procure LNG. Today, JERA has become the world’s biggest buyer of LNG, and it has assumed control of parent companies’ fossil fuel power stations. And today, JERA is Japan’s largest power generation firm, with a total output of approximately 67 million kW.

JERA uses cutting edge technologies, innovation with real boldness to optimize the use of its assets

By combining the strengths of two large electrical companies in Japan, JERA can fulfil the public interest of providing energy at competitive costs to Japan while ensuring a strong position on the increasingly competitive international energy market. Sami Ben Jamaa, Managing Executive Officer as well as Global CIDO (Chief Information and Digital Officer), JERA, says that the company’s name describes their objective: a new era of energy is about to begin. “JERA is taking a new route in the energy sector of Japan that is completely different from its parent companies, to adopt an innovative model of growth,” remarks Ben Jamaa. More than a joint venture, JERA is a carve-out from both the parent companies to maximize corporate value through a stable value chain of energy supply.

JERA is well placed to take on the current pain points surrounding the energy sector in Japan. The company understands that the new models of energy should be not only renewable but also flexible and intelligent to support Japan’s equitable approach, which provides energy to all parts of the country at the same price, calls for a more sustainable model for energy production. At the moment, the energy industry is lagging well behind in digital undertakings and innovation, due to long term asset management and complex country regulations as it does not produce any fossil fuels. Top this with Japan’s increasing issue of depopulation. According to the National Institute of Population and Social Security Research, Japan’s population in 2065 will be 88.1 million—almost two-thirds of what it is today. This means that there is less public to purchase electricity. So the power generation model should take into account the problem of depopulation and build a flexible energy infrastructure that can scale up and down as per the requirements.

JERA is poised to rightfully answer these questions by presenting a new governance and growth model for Japan.

JERA inherits a 70-year track record in providing stable power in Japan. It focuses on the development of new energy upstream investments, the integration of the process for new fuel procurement, and the creation of processes for the development of new thermal power plants and the scrap and build of obsolete thermal power plants both domestically in Japan and internationally. Besides, the company has expertise in operation and maintenance (O&M) and engineering, as it currently owns and operates a large number of power stations. “We assume long-term responsibility for our business, from construction to maintenance and operation of power stations, and ensure harmony with local communities,” states Ben Jamaa. JERA offers world-class O&M Engineering services by combining the expertise gained through business operations with the world’s leading technologies to ensure safe, competitive, flexibly adjustable operation of power stations and receiving terminals for customers in and outside Japan.

JERA is the owner of assets in the field of energy worth more than $35 billion. To optimize the use of its assets, JERA leverages cutting edge technologies and innovation with real boldness. In fact, the company spends hundreds of millions of dollars to maintain and operate these assets. “JERA has a unique opportunity to ride the wave of digitalization; it did not inherit the burden of legacy systems and complex business relationships from its parent companies. In a very short time, JERA has built a strong IT team, developed a solid strategy, and has already moved most of its compute workload to the cloud. In fact, Jera is the first power/utilities in Japan to move toward the full cloud for the mission critical systems,” says Ben Jamaa. Further, investing in cutting edge technologies, JERA uses AI for predictive defect detection and maintenance as well as a decision support system based on digital knowledge database. This saves money in the form of direct as well as an indirect cost. There is more to that than just maintenance, such as measuring and predicting the useful lifetime of an asset. The company is also moving from TBM (Time Based Maintenance) and CBM (Condition Based Maintenance) to RCM (Reliability Based Maintenance). However, the company’s most valuable asset is data. In fact, JERA has the longest value chain in the world right from exploration, capital and asset investment, transportation to trading, and power generation. JERA also makes use of technologies like cloud computing for moving all the workloads and 3D printing for replacing or fixing parts.

“JERA uses cutting edge technologies, innovation with real boldness to optimize the use of its assets,” says Ben Jamaa.

When it comes to power generation, JERA marks its position as one of the largest power producers in the world, owning eight LNG receiving terminals and power generation assets with a total capacity of approximately 75GW. The company also operates 18 LNG carriers while engaging with long-term LNG procurement from 10 countries around the world. Interestingly, the company handles a transaction volume of approximately 35 million tons of LNG annually, which is among the largest in the world.

“We are constantly improving our diverse development capabilities honed through these projects that cover fuel procurement through power generation as well as large-scale renewable energy projects, expanding our operations to meet the needs of each country and region,” says Ben Jamaa. Leveraging over a decade of experience in fuel trading, JERA ensures comprehensive optimization of energy flow from fuel procurement to transport all the way to power generation and sales. This way, the company sells electricity and gas through long and short term projects in Japan to meet the needs of customers and contribute to the development of the energy market.

Owing to JERA’s unprecedented skills and expertise in the energy sector, it has recently awarded a project of designing and installing an eco-system of power and energy in a small village in Japan’s Atsuma Town, Hokkaido. The town was heavily damaged in the 2018 Hokkaido earthquake. JERA will create an eco-system featuring solar parks, industrial battery storages, a biomass power generation plant, and a micro-grid connecting all these together. Interestingly, JERA will use trees fallen during the earthquake as fuel for biomass power generation. In addition, a data platform will be built to provide a balancing group to the whole settings, an operation, and maintenance AI application, and a P2P power exchange and CO2 certification blockchain system. JERA will successfully manage and develop all these structures and platforms from design to execution to operation. “Succeeding in such undertaking would allow JERA to lead the deployment of economically viable energy eco-systems across Japan as well as in Asian countries,” explains Ben Jamaa. “JERA has the knowledge of both renewable and traditional power generation and can cover the entire value chain from fuel buying to providing the electricity.”

What makes JERA a world-class leader in power and energy is its effective leadership team and expert associates that have a clear vision and strategy. The company’s digital transformation has been significantly and strongly progressing under the leadership of Ben Jamaa. In fact, the company is quickly responding to the recent situation of pandemic by allowing 90 percent of its office working employees to work from home by using its cutting-edge and globally scalable technology infrastructure as compared to other utilities in Japan. With over two decades of experience in IT consultancy and executive management, Ben Jamaa has led numerous transformation programs. Hailing from a non-energy background as he served a senior executive role at a reputed retail beverage company, Ben Jamaa believes that quick access and implementation of the huge amount of data is one of many common goals of digitalization in both industries. Similarly, both energy and beverage sectors are impacted by external factors such as weather, political situations, natural disaster, and public events. Ben Jamaa thoroughly understands the correlation between all these factors and excels at getting an intelligent approach to market and optimizing output.

With such strong governance, JERA aims for a borderless organization by proactively implementing change that provides sustainable energy solutions to Japan as well as the entire world. By continuing to deliver a stable supply of safe and economical electricity and gas to customers, JERA focuses on becoming the global industry leader in LNG and renewables, sparking the transition to a clean energy economy in the near future. By 2025, the company will offer solutions and become a leader in mainly two businesses: the LNG value chain business and the large-scale renewable energy business. These businesses are complementary; renewable energy with variable power generation output is complemented by flexible, clean LNG thermal power generation. Keeping in mind the growing energy concerns, the company plans to continue to grow as a global company and supply Japan with stable, economical energy helping to solve the energy issues facing the country.

Description
JERA has become the world’s biggest buyer of LNG, and it has assumed control of parent companies’ fossil fuel power stations, Today, JERA is Japan’s largest power generation firm, with a total output of approximately 67 million kW. JERA inherits a 70-year track record in providing stable power in Japan. It focuses on the development of new energy upstream investments, the integration of the process for new fuel procurement, and the creation of processes for the development of new thermal power plants and the scrap and build of obsolete thermal power plants both domestically in Japan and internationally 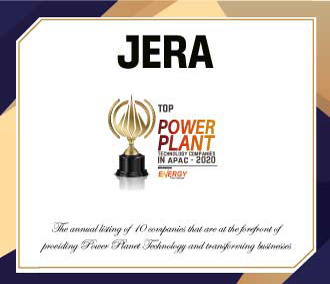