KEW Technology: Leading a New Era in Waste to Energy

Dr. Kamal Kalsi, CEO
Each year around the world, nearly hundreds of million tons of municipal solid waste is generated, which calls for adequate waste treatment. Among the widely used waste treatment techniques, the most popular is mass burn incinerators, commonly referred to as waste to energy facilities where waste is burned at very high temperatures to harness the heat produced to create energy. However, due to high carbon intensity and emissions of toxic pollutants, the best utilisation of the valuable waste resource is no longer incineration or combustion to produce electricity. It is increasingly more effective to convert waste into sustainable hydrogen rich gases and fuels to defossilise the harder to decarbonise sectors such as energy intensive industries, transport fuels and off grid energy sectors.

As a result, Advanced Conversion Technology (ACT) has emerged as the most viable alternative that thermally converts a wide range of both residual waste or biomass directly into a range of high value energy vectors far more efficiently than the incineration processes. Historically, the failure to deal with the resultant long chain hydrocarbons (tar) captured within the syngas stream has seen countless projects coming to an end, resulting in a loss of significant investment and confidence in the technology.

Rising to the occasion, KEW Technology a UK based sustainable energy solutions company has developed a low carbon ACT in the form of modular advanced gasification plants, which enables the efficient conversion of feedstocks at distributed and disruptive scale.

Through KEW’s proprietary process, waste or biomass feedstocks are converted into a sustainable, clean, and consistent gas, which can be used to provide heat,electricity or can act as the building block for advanced sustainable fuels.

These outputs are generated at a lower cost than conventional energy and fuel sources and significantly reduce the emissions associated with the applications they fuel.

With the ability to convert a wide, and sometimes difficult or even hazardous variety of waste and biomass feedstocks into clean hydrogen rich syngas, the company has become a leader in advanced gasification, which operates with higher efficiency than traditional incinerators or other gasification plants. “We focus on revolutionizing waste treatment to generate sustainable energy and deliver a world beyond fossil fuels,” states Kamal Kalsi, CEO of KEW Technology.

What makes KEW’s solutions stand apart is they are validated and were funded by the Energy Technologies Institute (ETI) a public private partnership to bridge the technological gap for small scale decentralised technology solutions (in the <10MWe scale).Back when ETI opened a competition to explore and discover innovative ACT technologies. Following vigorous and robust scrutiny, ETI selected KEW Technology, whose technology was fully capable of ensuring a zero carbon future.

In a sector with a high requirement for proven technology at full commercial scale, KEW has worked to establish a flagship facility in the UK called the Sustainable Energy Centre (SEC). The SEC is an advanced thermal conversion facility that leverages unique advanced gasification technology to revolutionize the production of 2nd generation fuels. It also acts as a Centre of Excellence for technology and product development by leveraging novel, ground breaking technologies such as carbon capture. KEW’s modular plants based on the SEC process and scale, are factory built and quick to assemble, and use locally sourced mixed wastes to provide a hydrogen rich gas vector that is used for the production of heat, power and pure hydrogen, sustainable aviation fuel and other chemicals.

In an Endless Pursuit of a Greener World

Capitalizing on its unique competencies, KEW has formed a joint venture with SHV Energy named Circular Fuels Ltd to develop renewable and recycled carbon dimethyl ether (rDME) production plants. These facilities will convert renewable and recycled carbon feedstock into sustainable liquid gas, in the process de fossilising a challenging fuel class. KEW’s proprietary advanced conversion technology will be used to produce renewable and recycled carbon DME, a LPG and diesel substitute, by processing a wide range of waste, bio based and residue feedstock with greater efficiency. SHV Energy, KEW and SHV Energy’s subsidiary Calor Gas have been working closely together for over a year on a FEED (Front-End Engineering Design) study for the first-of-a-kind plant, which will be located in the UK. Boasting a production capacity of 50 kilotonnes of rDME per year from municipal solid waste, the companies have planned to launch several such plants across Europe and North America. The rDME produced will offer customers an immediate route to reduce their carbon intensity without requiring significant investments in new energy systems. 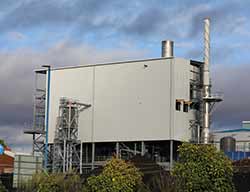 As KEW gears up for the near future, the company is finding itself at the heart of two parallel market evolutions: the drive towards zero carbon and the shift to zero waste as part of a circular economy. “We should keep chemical energy as chemical energy and as grid electricity decarbonises, a more valuable use for waste is efficiently displacing more carbon-intensive energy vectors, generating economic savings while providing environmental benefits,” adds Kalsi. Finally, with its one of a kind value proposition for espousing a variety of increasing technology routes to harness sustainable energy, KEW is ready to implement its solution in several other projects in the coming days and empower industrial corporates to achieve their net zero ambitions and sustainability goals.

Description
KEW Technology is a UK-based sustainable energy solutions company that has developed a low carbon ACT in the form of modular advanced gasification plants, which enables the efficient conversion of feedstocks at distributed and disruptive scale. KEW tackles climate change by efficiently converting all types of non-recyclable resources and low-grade biomass into sustainable energy vectors, such as hydrogen, power, heat and advanced fuels. Through KEW’s proprietary process, waste or biomass feedstocks are converted into a sustainable, clean, and consistent gas, which can be used to provide heat, electricity or can act as the building block for advanced sustainable fuels 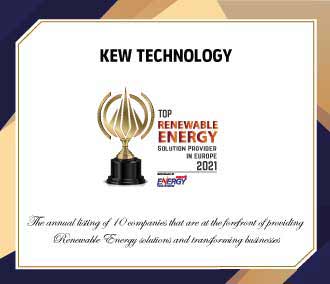