Omar Kulbrandstad, CEO; John Lovell, VP of Technology & Strategy; Aydin Babakhani, Chief Scientist
One of the most challenging problems for operators during oil production is the buildup of hydrocarbon impurities like wax and asphaltene in both the pumping equipment and the tubing and pipeleines used to convey that oil. The deposition very aggressively deposits inside, often halting products for cleanup and leading to substantial operational and maintenance costs.

This is where MicroSilicon can help with its cutting-edge, microsensor technology designed for harsh environments, enabling clients to effectively predict asphaltene formation and optimize proactive maintenance without impeding the production.

MicroSilicon’s QuantumRF Asphaltene Analyzer is the world’s first real-time asphaltene sensing technology. The analyzer integrates its sensing capability with the operator’s existing infrastructure to provide real-time analytics. In particular, it can monitor the chemical attributes of the hydrocarbon fluids as they pass through the wellhead, which in turn allows operator to optimize any chemical treatment operation. One of the unique properties of the sensor is that is allows an accurate measurement of asphaltene deposition upstream of the sensor, because its sensor measures all contribution of asphaltene, whether in solution or precipitated form.

“Our sensor technology looks for free radicals and other unpaired free electrons created in asphaltene molecules to quantify the amount of asphaltene in the fluid,” says Omar Kulbrandstad, CEO of MicroSilicon.

For continuous online monitoring and asphaltene deposition prediction, the Quantum RF Asphaltene Analyzer uses an electron paramagnetic resonance (EPR) component that can be integrated onto a single microchip. Currently in field test are three versions of the analyzer. One version is rated as ATEX Class One Division Two Explosion-Proof device for operation in the U.S. and Gulf of Mexico. The second is rated as ATEX Zone II for operation in Europe and the Middle East. The third product is portable and can be run within operators’ chemical laboratories for offline testing. The online systems are rated to 120 degree C and 2200psi, which means that MicroSilicon has the combination for almost all surface facilities around the world.

The onlines systems leverage IoT technology to connect the sensor to the internet, enabling seamless device control. The raw data captured is transmitted to the cloud for machine-based learning and A.I. processing which converts the raw data into actionable information. From the cloud, clients have access to all pertinent insights, which they can use to increase output, lower costs, improve operations, and better use resources in operational processes.

MicroSilicon’s approach is a significant step up from conventional chemical measurement approaches, where samples need to be transported to labs for analysis. Apart from the slow turnaround, the samples often get contaminated by atmospheric gasses and do not provide the information needed to accurately reflect the deposition rate and flow conditions in the pumping equipment. QuantumRF technology, in contrast, gathers and updates measurement data every 20 minutes. There is no need to send personnel to the site to take samples. The absence of oxygen exposure, atmospheric pressure, and temperature change ensures greater accuracy.

Our sensor technology looks for free radicals, or unpaired free electrons, created in asphaltene molecules to quantify the amount of asphaltene in the fluid

“The ability of Quantum RF to detect problems before they occur spares operators from spending millions each year. It also mitigates asphaltene buildup and optimizes the maintenance schedule, which increases production life and asset life while reducing outage frequency and duration,” says John Lovell, Vice President of Technology and Strategy, MicroSilicon.

The impact of its unique sensor technology in the energy tech space has garnered many accolades for MicroSilicon, including two nominations for World Oil Awards. It was the winner of an ADIPEC Award for Excellence in Energy in 2021, in the category of Breakthrough Research of the Year. Building on the research that began at Rice University, MicroSilicon has also launched a downhole transmitter that can communicate with microchips deployed into the rock. This project subsequently won a second Excellence in Energy award from ADIPEC in 2022, again in the category of Breakthrough Research of the year. No startup has previously won at ADIPEC two years in a row.

Even though MicroSilicon has been in business for only three years, it already has a global footprint with operations in four countries. Since there aren’t many small startups with a global presence, MicroSilicon’s work is commendable. Taking care of its customers and easing operator difficulties, MicroSilicon is a key facilitator of efficiency in the energy sector.

Description
The Quantum RF Asphaltene Analyzer measures a chemical fingerprint of the oil flowing through wellsite hardware. It can operate under high pressure conditions up to 2200 psi and is explosion-proof. It can be put in anywhere on location that provides access to the fluid and its associated IOT system transfers to cloud for machine learning and diagnostics. 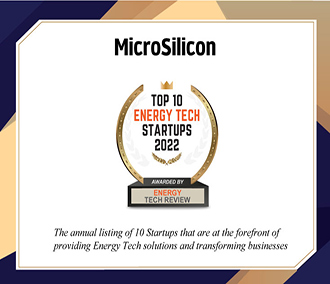