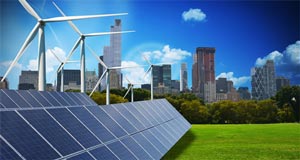 Renewable Energy Credits (RECs) are a way of keeping track of how much electricity is generated from renewable energy sources. Companies can directly cover their own power usage by purchasing an equal amount of clean energy electricity by purchasing RECs.

FREMONT, CA: Corporate social responsibility or sustainability systems have been in place at major corporations for a long time. The drive to contract directly for renewable energy, on the other hand, is a relatively new phenomenon. In certain instances, the primary motivation is one of today's most essential realizations: development necessitates increased electricity consumption. Many of the world's largest businesses have grown by expanding the number of data centers they have to power their networks.

These data centers consume enormous quantities of energy, posing a problem for businesses: how can they continue to expand while still meeting their specified sustainability goals? The short response is to use renewable resources to fuel the new data centers.

There are three main approaches for businesses to meet their sustainability goals. First, companies have installed solar panels at their headquarters to generate as much renewable energy on-site as possible. One electric car manufacturer is another great example of this strategy, to eventually be able to operate the entire facility off of clean solar energy generated (and stored) on-site.

The second choice is to purchase Renewable Energy Credits (RECs). RECs are a way of keeping track of how much electricity is generated from renewable energy sources. Companies can directly cover their own power usage by purchasing an equal amount of clean energy electricity by purchasing RECs. This, or a similar strategy, is taken by many of the 241 businesses with 100 percent renewable energy goals. Although a company may pay for enough RECs to cover 100 percent of its energy needs, the actual electricity used by the company is still provided by their standard utility or grid, rather than renewable resources.

The third option is to hire renewable resource developers directly to create a solar or wind farm specifically for the business. Corporate renewable capacity procurements increased by more than 6.5 gigawatts (million kilowatts) in 2018, more than double the total for 2017. According to one market research, corporate renewable procurement drove a quarter of all solar projects announced in 2018.