PDE supports its brand promise of ‘Turning Power into Positive Energy by Being Trusted Experts in Renewable Energy” with three operational pillars—Helping Communities in Need, Conception to Electrification, and a Team of Passionate Experts. PDE’s mission-driven approach has attracted some of the best and the brightest from inside and outside the solar space who have expertise in leading large corporations and developing and operating utility-scale solar projects across the U.S. and the world.

“The utility-scale solar industry is very transactional, with companies typically working to achieve project milestones in an attempt to sell the project to someone else,” says Jon Schwartz, the CEO of PDE. “We approach our projects with the end goal to finance, build, own, and operate the facility long term.”

The team at Painted Desert Energy has invested the last two years in attracting world-class talent and partnerships. One such partnership is with Excelsior Energy Capital (EEC), one of the industry’s premier financial institutions. This partnership means PDE’s projects are fully funded from day one. PDE has also partnered with IsoCarbon Corporation (Iso), a new mission-driven company focused on providing highquality food, infrastructure, housing, and jobs to under-served communities. EEC gives Painted Desert Energy the flexibility to quickly pursue new opportunities as they present themselves. IsoCarbon helps PDE create an even greater impact on the real lives of native community members and deliver on its pillar of Helping Communities in Need.
Another pillar of its brand is Conception to Electrification. This approach means that PDE can pick up a project from anywhere along the process timeline and get it done. The third pillar, a Team of Passionate Experts, ensures that PDE has expertise in all facets of the process, from site evaluation all the way to interconnection and then on to operation and maintenance. This team is not only passionate about delivering PDE’s mission but also gets projects done on time and on budget.

“Not only do our solar projects have the obvious benefit of limiting global warming for our children and grandchildren, but we are also helping improve people’s lives today,” states Doug McCorkle, the Chief Branding & Culture Officer at Painted Desert Energy.

We approach our projects with the end goal to finance, build, own and operate the facility long term

The company has recently partnered with the Navajo Nation to launch a two-phase project, totaling over 1GW. Previously, several developers promised the Navajo Nation a solar solution, but they did not have the end-to-end expertise and resources to get those projects done or they were sold out and not completed. PDE brings the expertise needed, including relationships with local utilities, to get projects like this done.

“Our vision is to have a real impact and make the world a better place,” says Schwartz.

Description
PDE supports its brand promise of ‘Turning Power into Positive Energy by Being Trusted Experts in Renewable Energy’ with three operational pillars:Helping Communities in Need, Conception to Electrification and a Team of Passionate Experts. 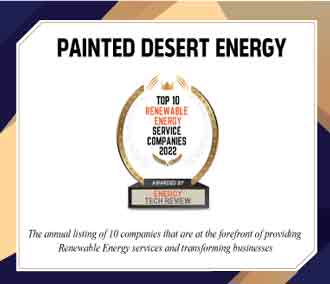