From the moment the key turns in the ignition to when the engine whirrs to life, a silent majority of people acknowledge that the world moves on oil. For it to get from the gas station to your tanks is only the last phase of its journey. Before that, there are teams of specialized companies that work around the clock on rigs all over the globe, to get that oil out of the earth and to that pump near you. Edge computing power, today, has finally caught up to the math behind drilling, formulated in the 1950s—a time when the foundations of oil discovery and drilling were established. This gap, between the starkly contrasting analog oil field and the digital edge, should not exist. The reason? The tremendous potential of digital transformation would save the oil industry a substantial amount of money in maintenance, while constantly improving the efficiency and safety of the rigs. Catalyzing this advancement of the oil and gas energy industry is to improve the industry as a whole with digital transformation, which is precisely what RigNet had in mind when the oil prices fell about four years ago.

It is not unusual for an Industry to go through a significant event, forcing business models to change. In fact, one such “shake up” triggered by a global decrease in prices of oil spurred the transformation of RigNet's portfolio. “The industry’s need to change initiated the next evolution of RigNet from a company that only provided communication services to one that accelerates our customers Digital Transformation,” states Steven Pickett, CEO of RigNet. Today RigNet provides solutions like ultra-secure communications, lloT integration, and real-time machine learning-based AI, helping customers in the oil and gas space speed through their digital journey.

Oil and gas companies often had teams of people working on specialized IT solutions to support their business on and off-shore, across a diverse range of requirements. These teams were resolving the issues and risks associated with the extreme hazards of exploration and drilling. IT sub-teams for cybersecurity and remote communications helped enable the previous generation of data applications. As a result of rapidly declining oil prices, these teams had to be downsized, creating a situation where the industry needed the help of the collective expertise of a multi-discipline technology company like RigNet. A second cross-sector seismic shift was also underway with the emergence of AI backed real-time analytics that added a new avenue for the Energy sector to massively reduce the operational budgets through technology. The answer would no longer be a robust communications services offering, but one that could provide a broader set of technology services that would allow oil and gas companies to digitalize their operations holistically, and, ultimately, their entire business.

Executing their digital accelerator strategy of oil and gas, RigNet's Expanded its portfolio of organic development and acquired a number of innovative technology companies. RigNet began organically building specialized applications that make oil and gas operations safer and more efficient, allowing more remote shore support so experts could help not just a rig, but the whole oil field. Acquisitions included a cybersecurity company that brought its core knowledge to RigNet, which was then rolled out to customers.
RigNet has since built on top of that acquisition, to have a whole host of cybersecurity services for the off- and onshore oil and gas industry, which help to protect their networks and data. Most recently, the company has added ML and Al capabilities-for predictive maintenance and resolution- through another acquisition, which has proven to be quite a powerful addition.

It is in this strategic combination that they have put together, where Rig Net's ingenuity lies. The company ensures that they provide customers with a solution that meets their exact requirements, reduces efforts in half, and extends simplicity, all the while listening to the market requirements.

RigNet is constantly optimizing each of the components in their solutions, giving customers a single point of contact that can help them get maximum performance of their assets in the field, to help increase their operational savings.

As one of the larger communication operators in the world, particularly in the energy sector, RigNet can work several hundred miles offshore or in the middle of nowhere, wherever the facility may be. They realize that if there are limits imposed by latency, it would result in percentage packet losses, especially when dealing with big data analytics in real time, which can affect the bottom line. Providing clients with the ability to predict the future and then correct it quickly is RigNet's big differentiator.

Theirs is an experience driven by a background in working on remote communications, all the way since 1974. They recently integrated cybersecurity with communication systems at offshore rigs, which became a development that was taken note of at the CIO level across the industry. This progressive coupling of two disparate sectors led a further discussion on the lack of cybersecurity professionals worldwide, especially in oil and gas. RigNet is leading the revolution by meeting the demand with their cybersecurity experts and their collective of ex-oilfield services professionals.

“As major communication operators go, we are supporting mission-critical global solutions in the areas of voice, data, video, and cybersecurity with end-to-end services, satellite, fiber, microwave, and cellular,” adds Pickett. RigNet truly integrates the network with the cybersecurity layer, Al, and application layer, by having pre-packaged offerings which eliminate considerable upfront costs for customers.

RigNet is also certified with a number of different security ratings, including government-accredited ratings for industrial and oil and gas sectors.

RigNet recently won Shell's game-changer award for AI. There, as a part of the competition, Shell wanted RigNet to work on decision augmentation in real time so that the system can “listen” to all the Shell staff's chat messages. RigNet’s solution then was able to decipher the conversations people were having about an event, and learned from their reactions; all based on their communications over chat. RigNet was able to turn that information into a learning instance so that the next time there is a similar type of event, it can react to the conversations and quickly provide alerts: “Look at the alarms over here! We've seen this before; let’s try this...”

RigNet had thus developed a decision augmentation system using machine learning, which not only boosted operations, but improved efficiency in the field.

RigNet is currently working on a project to create an outdoor wireless technology that can be paired with wearables to help with safety and productivity. In the case of a job site accident, the system can identify injured people and light up on the staff's armbands, and signal them to go to the muster point because of a fire or other such hazards at the industrial site. To this end, over the last 18 months, RigNet has launched close to seven new products, including a whole new suite of cybersecurity managed services offerings. RigNet also owns the largest digital microwave network in the world, all offshore. Their communication range is spread across 57,000 square miles in the Gulf of Mexico, with low latency microwave. RigNet has also announced that they are in the process of upgrading this network to LTE coverage that will offer 4G and then soon 5G capabilities.

“As major communication operators go, we are supporting mission-critical global solutions in the areas of voice, data, video, and cybersecurity with end-to-end services, satellite, fiber, microwave, and cellular”

Innovations such as these are aplenty in the RigNet team that comprises talented professionals, with a commitment to customer service and a sense of urgency to support them. Their motto of FOCUS, or Facilitate Our Customer's Ultimate Success, has helped them build a solutions and services bundle that helps customers accelerate the digitalization of their business and support every aspect of the energy ecosystem.

Today, RigNet is building their team by marrying organic growth with a little inorganic growth- having invested in six different companies in the last six quarters as they continue to be aggressive on the M&A front. Because the oil and gas industry is still in consolidation, RigNet feels like they are a logical acquirer. But as far as technology goes, they have all the parts they need to realize their vision of becoming an enabler of digital transformation. RigNet offers a remarkable bundle for digitalization and, in the words of Pickett, “provide lessons to industries and businesses that are looking to maximize their remote assets, in ways they have not considered.” 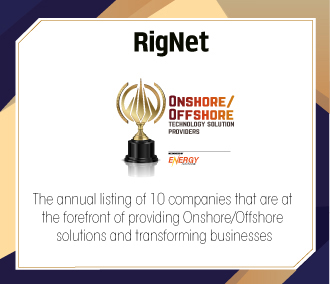