Jeffrey W. Martin, Chairman & CEO
Over the years, due to the decline in natural gas prices and a surge in the costs of generating electricity from coal have resulted in doubling the use of the former. Due to rapid growth in population, it has become crucial to supply affordable energy to residents with minimal impact on the environment. Based in San Diego, Sempra Energy is an energy infrastructure firm which delivers gas and electricity to approximately 40 million consumers around the globe. With a robust energy infrastructure system, the firm ensures effective interconnectivity between energy produced and energy consumed, maintaining a secure network of electricity transmission and natural gas pipelines across the energy industry.

Since sustainability is its priority, Sempra Energy focuses on the issues that are of utmost importance, both, for the company and the stakeholders.
The firm makes sure that all the projects comply with environmental policies and regulations. The power generation facilities are designed to encourage the idea of sustainability, not only in land but also in marine environments. For instance, the infrastructure in power generation is planned in such a way that less amount of water is utilized in the process while withdrawing gallons of salt water to re-gasify Liquid Natural Gas (LNG), with the water being returned to the source. Through its sustainable business model, Sempra Energy is committed to a low-carbon infrastructure, which reduces harmful emissions and leaves a positive impact on the environment. Keeping in mind the clean energy developments, Sempra Energy works to identify problems, reduce emissions, and mitigate climate-change-related risks to achieve long-term growth for its clients.

Since sustainability is its priority, Sempra Energy focuses on the issues that are of utmost importance, both, for the company and the stakeholders

Through SoCalGas’ ambitious environmental goals, Sempra Energy plans to fight climate change, provide affordable energy, develop long-term renewable energy storage, and promote consumer adoption. To be the cleanest natural gas utility in North America, SoCalGas focuses on replacing 20 percent of the traditional fossil fuels with natural gas by the year 2030. Besides that, the company has not only been consistent in delivering high-performance in the corporate sector but also implements ‘diverse’ and ‘inclusive’ workplace environment. Sempra Energy promotes and embraces diversity in the workplace and fosters global company culture and was ranked as the ‘Best Places to Work for LGBTQ Equality’ on the Corporate Equality Index.

Description
Provides electricity and gas services, as well as, invests in, develops, and operates energy infrastructure in the U.S. 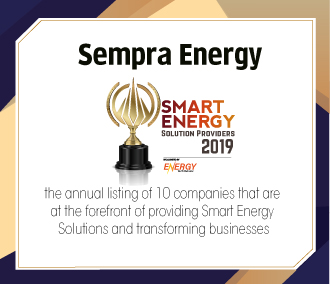