Unisun Energy Group: Making The World Sustainable, One Country at a Time

Alex Hao, Co-Founder & CEO
The Zonnepark Rilland photovoltaic project—hailed to be the largest utility-scale system of its kind in Europe to date—is built with 11.7 MW of N-type bifacial solar modules. The plant has around 40,000 of these modules. Behind the scenes of this great feat is Unisun Energy Group, a China-based renewable energy solution provider that is driven by the mission to supply clean and stable energy for all of humanity.

On the Asian renewable energy producer scoreboard, several players such as Japan and China are reigning over the others. “However, despite being a larger nation, China is not at par with Japan, and part of this is due to the constantly changing government policies,” states Alex Hao, co-founder and CEO, Unisun Energy Group. Since most companies in China are dependent on government subsidies, changing the business model amid the fluctuating policies puts the industry under continuous pressure and uncertainty. Unisun is thriving in such a turbulent environment by staying independent of government subsidies, and as a result, is demonstrating a significant advantage over its peers. With a clientele that spreads across the globe, Unisun has significant investments coming from the overseas markets.

According to Hao, “Our extensive knowledge in the energy industry and particularly in photovoltaic systems has empowered Unisun in working on projects to produce sustainable, clean, and environment-friendly power across the globe.” The firm designs and creates photovoltaic power stations, with its international team of highly qualified specialists who have implemented power plants with an overall capacity of more than 1.4 GW. While the team forms one of the two strong pillars of Unisun’s corporate strategy, the other one is the promotion of innovative renewable energy technology. Unisun not only endorses creative ideas but also prepares businesses for the paradigm shift by increasing the accessibility to investors.

At the time of engagement, Unisun’s clients are protected by a power purchase agreement (PPA) from the variability of solar energy and, reap the benefits of predictable power costs.

Unisun also assists in the development and maintenance of renewable energy power plants. Of the numerous success stories created by Unisun, their collaboration with one of China’s largest beverage producers demonstrates the company’s unique value proposition. Unisun installed rooftop power plants in 34 factories located in 25 cities across 19 provinces within six months. The project generates roughly 70,000 MWh annually and takes care of the electricity needs for the beverage producer in China.

Our extensive knowledge in the energy industry and particularly in photovoltaic systems has empowered Unisun in working on projects to produce sustainable, clean, and environment-friendly power

Hao foresees the future for renewable energy to be filled with opportunities, owing to the decrease in prices of components, such as solar panels and inverters. Additionally, the low cost of storage allows photovoltaic power plants to supply inexpensive energy to power-devoid areas.

Established in 2013, Unisun has grown to have earned itself major clients, such as Unilever and Fuji Electric. In the years ahead, Hao plans to spread into European countries such as the Netherlands, Poland, Hungary, and Germany. Most regions that use coal to produce energy—Africa, South America, and Southeast Asia—have the potential to move to solar power since using conventional resources will eventually lead to exhaustion. Along with its passionate team of innovators, Unisun is striving to fulfill Sir Thomas Edison’s words from nearly a century ago. “I’d put my money on the sun and solar energy—what a source of power! I hope we don’t have to wait until oil and coal run out before we tackle that.”

Description
Established in 2013, Unisun Energy is committed to the global realization of sustainable energy projects and the production of clean and eco-friendly power for all. The renewable energy solution provider, located in Wuxi, the capital of China’s photovoltaic industry, is considered a reliable and innovation partner in the field of renewable energy. The corporate stance of Unisun is built on two strong pillars, first of which is the global design and realization of major photovoltaic power stations. The other pillar is Unisun’s promotion of innovative technologies in the field of renewable energies 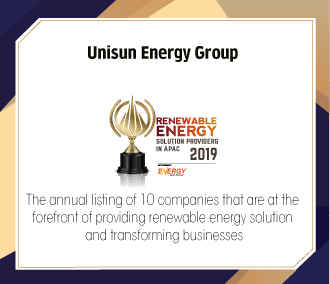