When the world went on frequent lockdowns last year to flatten the pandemic’s curve, nature got a reprieve, or so it seemed. Dolphins were spotted swimming in the Hudson River, Los Angeles’ famed smog dissipated, and many wild animals were strolling the empty city streets. The media’s narrative was clear: the COVID-19 lockdowns allowed nature, and the environment, a temporary healing space. But more importantly, the unfolding of such events served as a powerful reminder for us to pay closer attention to the ongoing climate change.

The world today, more than ever, understands the importance of ‘defossilizing’ its fuel. Even governments and policymakers around the globe are devotedly working toward creating a sustainable and clean energy future. For instance, last year, California became the first state in the U.S. to pass a mandate that every new single-family and multi-family home up to three stories high must include solar rooftops. Some other states, like Nevada, have now decided to offer a 26 percent tax credit to homeowners who install rooftop solar panels. Even outside the U.S., countries like France and Spain are actively enacting laws and announcing targets for solar energy capacity to be installed in buildings. It is only a matter of time before solar rooftops become commonplace in households globally. To that end, a company that is bringing everyone one step closer to achieving this feat is SunStyle, a trailblazing solar energy tech solution provider. The company is upping the game of an age-old and reliable renewable energy industry through its uniquely designed solar shingles. The photovoltaic (PV) tiles mimic the appearance of premium roofing materials, like asphalt or slate, while performing their core task of generating electricity using solar energy.

Explaining the ingenuity of this solar technology, Jessie Schiavone, CEO of SunStyle, says, “Solar roofing is going to be the future of roofing technology, and our solar shingles—a thoughtful blend of aesthetics and functionality—are going to break new ground to make this technology more accessible for all.” The company’s recent statistics further corroborate her statement. Last year alone, SunStyle witnessed a recordbreaking sales spike for its solar shingles in the European region, approximately by 40 percent. “Being at the helm of this innovation since 2007, we are prepared for these seismic shifts in roofing needs and ready to take solar roofing technology to the next stage,” Jessie adds. Supporting her statement, Charlie Mayer, COO of SunStyle, comments, “The champagne bottle is about to pop, and we think that it will pop on our watch.” 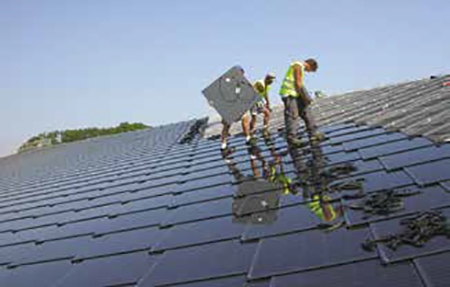 But what makes SunStyle’s solar shingles so different from the conventional solar panels already in use? Mayer has the perfect answer. With the rising trend of solar power as a commodity, the need to diversify its application is becoming imminent. “Put simply, building-integrated photovoltaic (BIPV) technology needs to evolve and become more optimized for the houses they are a part of,” explains Mayer. Imagine more modular solar shingles instead of bulky conventional panels that can pave the way for easier installations without disrupting the integrity or artistry of the roof. “Moreover, while traditional solar panels go on your roof, our product is your roof—that’s our biggest differentiator,” asserts Charlie. Another important aspect is the raw materials used to make the novel solar shingles: glass and PV cells, which are widely available and inexpensive commodities. Invariably, SunStyle’s solar shingles not only cut down installation costs but also increase the durability of the roof (by almost 30 years). Undeniably, SunStyle is the embodiment of creativity meeting innovation.

Being at the helm of this innovation since 2007, we are prepared for these seismic shifts in roofing needs and ready to take solar roofing technology to the next stage

Designing Power-Packed Roofs for More than a Decade

With over a decade of experience, 500 projects worldwide, and 500,000 solar shingle installations, SunStyle has carved a niche for itself in the solar roofing domain today. But, looking back to its inception, Mayer mentions, it all started when an ingenious Swiss inventor came up with a simplistic idea: “Solar energy generation should not conflict with attractive roof designs.” That’s how PV roof shingles were first conceptualized. Today, even though a lot of innovative companies, including the tech-giant Tesla, are coming up with their versions of solar roofs, SunStyle is considered one of the early innovators of the concept. Over the years, the company has continued to improve its original design to create a highly customizable, cost-effective, aesthetically pleasing solar roofing system. The company even developed and certified PV color-coating technology, expanding the product line to include terracotta-red and slate-grey solar tiles.

Today, buildings from modest residences and historic churches to commercial institutions across North America and Europe are adorned by SunStyle’s visually appealing solar roofs. SunStyle’s roofs look just like a premium tiled roof, only more beautiful as these tiles can be energized by the sun and are more worthwhile as they drive down the electricity bill.

If SunStyle’s solar shingles were not unique in itself, what further sets it apart is the patented diamond-shaped design inherited from its Swiss lineage. Unlike usual square tiles that are lined up next to each other, SunStyle’s diamond-shaped solar shingles overlap and interlock on top of each other, creating a leak-proof seal. The design ensures there are no gaps in coverage, protecting the roof against wind, hail, rain, snow, and even fire—which, in turn, adds to the longevity of the roof.

Equally impressive is the installation process. SunStyle puts a lot of effort into ensuring that the installation is as easy as possible, thereby reducing labor hours and error rate. “Any traditional roofer can install SunStyle’s product without having to go through extensive training,” says Jessie. 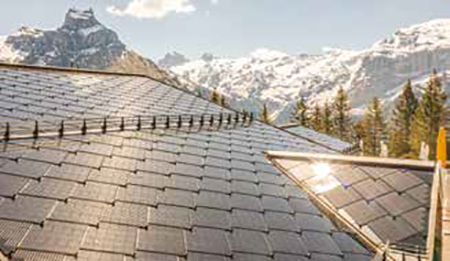 That’s not all. To continue this winning streak of innovation and service quality, SunStyle is utilizing its recent funding significantly in R&D to upgrade its products with the latest technologies while complying with UL testing and certifications. “We are also focusing on a lot of outreach, engagement, and marketing to introduce our product to new markets,” shares Mayer.

Illuminating the Path to the Future

Having established a strong name for itself in the European market, in the next couple of years, SunStyle is envisioning gaining a strong foothold in the U.S. What will aid SunStyle in such an endeavor is the growing support of industry giants like Google—which is determined to eliminate carbon emissions from its offices and data centers. Striding in that direction, the tech behemoth’s new Mountain View, CA campus, which is set to open next year, is slathered with SunStyle solar shingles. Asim Tahir, District and Renewable Energy Lead at Google, acknowledging this endeavor and SunStyle’s innovativeness (one of Google’s partners in this project), said in one of his blog posts: “SunStyle came to us with a highly textured prismatic glass shingle with a unique coating technology. The prismatic nature of the glass trapped light that would normally escape from traditional flat solar panels and reduced reflective glare that can be a problem for drivers and pilots. That same texture that provides all that function, also gives the overlapping panels a unique sparkle that earned it its name ‘Dragonscale.’” Appreciative of the design, even Sundar Pichai, Google’s CEO, mentioned to Bloomberg Green that the Dragonscale solar panels were going to be a big feature of their office buildings. “To me, it’s kind of a statement, simply showing that building solar roofs can be aesthetically amazing, delivering energy savings and so on. Overall, it fits the theme of pushing technology and boundaries.”

As these ambitious undertakings come to fruition and more globally known companies become receptive to adorning the aesthetic solar roofs, SunStyle is poised to open the doors of its solar roofing solutions for more people and help reduce fossil fuel dependency. “Our long-term goal is to make the world more sustainable in terms of energy usage—one home, one business, and one city at a time,” concludes Jessie and Mayer in a committed tone.

Description
SunStyle, a trailblazing solar energy tech solution provider, is upping the game of an age-old and reliable renewable energy industry through its uniquely designed solar shingles. With over a decade of experience, 500 projects worldwide, and 500,000 solar shingle installations, SunStyle has carved a niche for itself in the solar roofing domain today. Buildings from modest residences and historic churches to commercial institutions across North America and Europe are adorned by SunStyle’s visually appealing solar roofs. SunStyle’s solar roofs look just like a premium tiled roof, only more beautiful as these tiles can be energized by the sun and more worthwhile as it drives down the electricity bill 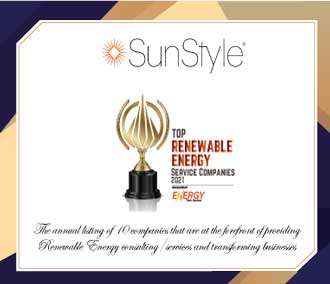