Dr. Tom Denniss, CEO
Typically, base load power is generated by coal or gas-fired power stations which can store fuel to be used on demand. Renewable energy, without adequate storage capacity, is not considered as base load power due to its intermittency that can prevent constant production of a given load of power. However, wave energy is one such source that overrides other renewables, as it is more predictable and consistent compared to wind and solar, allowing it to be considered as a source of complementary baseload. This means the longer time frames of the variability of wave energy allow it to be used to complement existing fossil fuel base load sources without creating surges in power delivery. It can be used in conjunction with traditional base load sources with a seamless transition between renewable and fossil fuel sources. For example, as waves increase in size, producing more energy, a coal-fired power station can gradually scale back its production, and vice versa. Breaking new ground in generating wave energy is Wave Swell Energy (WSE). The company has developed a technology that converts wave energy into electrical energy to produce clean electricity that complements base load. “This is an exciting development as waves are reliable and a naturally occurring virtually infinite resource,” says Dr. Tom Denniss, CEO of the company.

In addition, unlike the existing deepwater applications with floating units that result in high maintenance costs, WSE's units involves no moving parts in the water. In fact, OWC devices are constructed from concrete, using simple molds and steel reinforcing. It sits on the shallow (5.75 m deep) sandy seabed under its own weight, requiring a small footprint and no anchoring. The devices can be re-floated and towed to another location, allowing ease of access for maintenance and operation, thereby greatly minimizing costs.

Our technology is now on the cusp of true commercial viability, thereby providing clients with a solution that is finally cost effective and environmental friendly

Further, WSE’s technology covers a range of uses apart from electricity generation. It also proves to be beneficial to combat the issue of coastal erosion. The traditional methods of dealing with this problem are installing breakwaters, sea walls, and groynes that require a significant capital outlay, which is a sunk cost. On the other hand, WSE units, when deployed in close proximity to each other, act as a breakwater or sea wall while converting that energy into electricity. This not only protects the coastline from erosion but also generates an annuity-style revenue stream from the electricity generated. 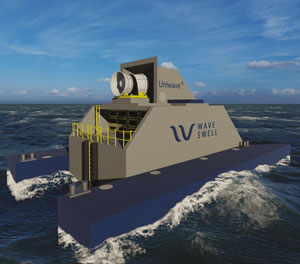 To demonstrate the commercial viability of the technology, WSE is developing a project on King Island, which will be operating by Q2 next year. The company is developing this 200 kW wave energy facility on King Island in conjunction with a local provider, Hydro Tasmania, which is Australia’s largest generator of renewable energy. WSE will deliver energy from the project and integrate operations with the existing high penetration renewable network of Hydro Tasmania, that will independently meter the energy produced and validate the efficacy of the project. “Our technology is now on the cusp of true commercial viability, thereby providing clients with a solution that is finally cost effective and environmental friendly,” notes Denniss.

Description
Established in 2012, Smappee is a global cleantech company that aims to save its customers energy and money by reducing energy consumption and improving energy efficiency. The business’s future-proof energy monitoring system uses state-of-the-art technology to analyze the real-time use of electricity, solar power, gas, and water. Smappee is a leading player in its field, offering accurate energy data down to the appliance level. The enterprise’s low TCO and multiple integration options make Smappee a match for ESCOs and companies looking for IoT energy technology integrations. Some of the vital specialties of Smappee include OEM, ESCO, utilities, energy savings, energy monitoring, IoT, submetering, solar energy, self-consumption, auto consumption, energy control, business-to-business, international sales, and energy management